Share All sharing options for: The Shutter: Cafe Biarritz, Cosi, Pintxos, and Kyma

It's been a fairly shuttery week with the shuttering of the Brooklyn Heights trifecta (The Busy Chef, Blue Pig, The Oven), Brooklyn BBQ, and old timers Cafe Mozart and Coco Pazzo, along with the shutter announcements from David's Bagels and Borough Food & Drink. But, alas, there are still a few more: 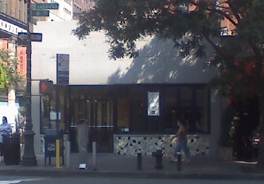 1) Union Square: A correspondent writes in with some more bad news for Cosi, a chain that recently made the blogs for a Midtown DOH'ing: "The Cosi on 6th ave and 13th street is not only gone, but the place is totally cleaned out. Only a week ago it was in full operation. I wonder if it was DOH that closed them down? Thought maybe it was noteworthy bc of the recent DOHing of the one uptown." [Shutter Inbox]

2) Soho: A reader has some bad news to report from the Basque tapas joint, Pintxos: "Just walked by Pintxos (which hasn't been open for lunch all summer) and all the doors and windows were open with big 'Sale' signs posted outside. Inside there were some guys in chefs whites and some brown boxes filled with what I assume were the supplies they were selling off." [Shutter Inbox]