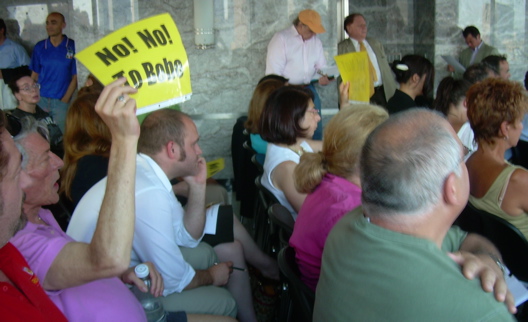 Last night the beleaguered Business Committee of Community Board 2 met in front of an incensed public to review liquor license applications. The word of the night from the committee was “layover!” The complaint of the night from the public was “noise!” A number of hotly contested applicants, including The Beatrice Inn and Spread NYC were laid over until August’s meeting. The crowd considered the layovers to be an elaborate conspiracy to cheat the public out of voicing their opposition, as most of the more vocal and opinionated members of the public will be off vacationing at the time of August’s meeting. To set the tone of the meeting, committee chair Raymond Lee began with a rant about people speaking out of turn, declaring, “I am not in the mood!” Let’s begin:

1) Keith McNally’s proposal for a new pizza-centric restaurant on the corner of Bowery and Houston was met with public outcry. He requested hours of 9 am to 2 am for the 2300 sq. ft. space. McNally defended his proposal with details of his good relationships with communities and neighbors of his other restaurants. Committee chair Raymond Lee advised the members of the public that McNally’s proposal was "one of the best applications that could be in this space.” McNally agreed to layover the decision until September.

A response from a member of the public to McNally’s presentation was the quote of the night: “I find this to be a really elaborate fishing expedition.” No further explanation of this metaphor was provided.

2) The most organized opposition group award went to Bobo. A crew of about ten people showed up with “Say No No to Bobo!” signs and also considered the slogan, “Bobo is a Boo Boo.” While Bobo wanted to add four barstools at an existing bar, many in opposition were concerned about noise and hours of operation. It will be decided in August.

3) The Beatrice Inn's liquor license renewal was laid over until the August meeting, a decision not met kindly by the members of the public. The Beatrice’s representative explained that the owner was on his honeymoon in Kenya, but would be present at the August meeting “so we don’t look like ghosts in the night.”

4) R&L Restaurant was approved for a transfer with no opposition, but committee members hinted at their dismay of Florent’s demise.

5) David Rabin’s 14 Bar at 63 Gansevoort St. was approved without opposition. He hopes to be open within the next six months.

6) Bobby Schagrin’s restaurant at 482 Broome St. was approved as well, being that it was only a transfer of a previous liquor license.