A few big time plywoods and pre-plywood rumors have hit the blogs today with full force. Let's see what's going on out there: 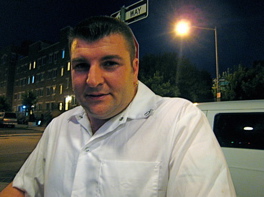 1) Flatiron: Snack brings the news that an ex-Le Cirque chef is opening up shop in on 22nd St: "A post on last month's closing of Cafe Gray made a parenthetical reference to where some of Gray's staff may likely wind up. It mentioned a former Le Cirque chef, opening a place...Word on the street says chef Alain Allegretti is indeed doing a turn-key deal on a restaurant on 22nd Street off Fifth Avenue and hopes to open his eponymous restaurant in mid-July. Bastille Day peut-être ?" [PRE-PLYWOOD]

2) East Village: VittlesVamp hears about a new pork sandwich coming to the EV: "Ever since Philadelphia's Tony Luke's shuttered its outpost in Hell's Kitchen, the New York City food scene has been bereft for the disappearance of the restaurant's sublime Roasted Pork Sandwiches...the Big Apple will not have to mourn the loss for long. Looks like Chef Sara Jenkins is planning an East Village Porchetta Sandwich shop that is certain to generate loads of foodie buzz and long lines out the door." [PRE-PLYWOOD]

3) Williamsburg: Slice reports on an August opening of a new Williamsburg pizza joint: "Nicola Bertolotti...will be opening his own place in Williamsburg in mid August...Fornaccio will make Neapolitan-style pizzas there, and the oven will be wood-fired...The space is on Havemeyer between North 6th and North 7th streets, not more than a pizza-brick's throw away from Fornino, where Bertolotti once worked under chef-owner Michael Ayoub." [PLYWOOD]