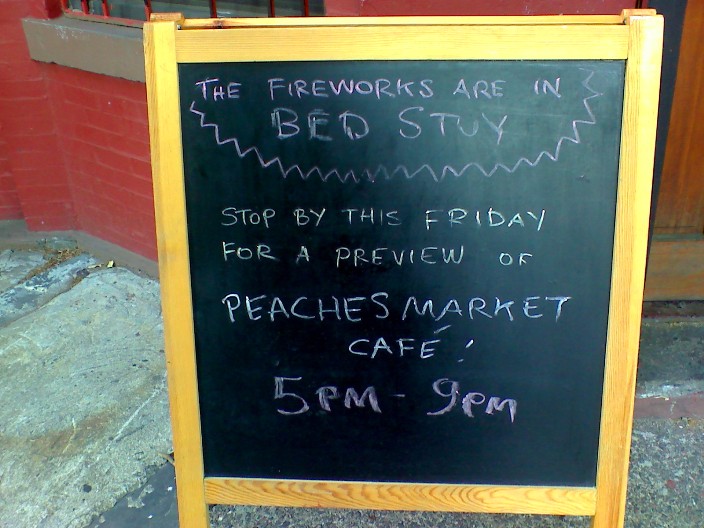 1) East Village: The über-delayed East Village pan-Asian bistro, Kurve, which was originally slated to open last fall, is finally hitting the NYMag Openings page this week. Details are as follows: “Dim sum range from shark’s-fin dumplings to foie gras shumai, and an assortment of salads includes a miso-dressed nori sampler and a Thai-style papaya salad with bigeye tuna...Desserts, including yuzu panna cotta with huckleberries and black-pepper meringue, are courtesy of P*ong’s Pichet Ong.” Phone calls confirm that to no one's surprise, the opening will not be this week, but next. Status: Not Open. Opening July 16th. 87 Second Avenue; 212-260-8018. [NYM]

2) Chelsea: The recently plywooded Socarrat Paella Bar is scheduled to open this week according to NYMag. Here’s the lowdown: “Socarrat Paella Bar, named for that delectable crust that forms on the bottom of a paella pan, is the second restaurant venture of Jesus Manso, who also owns La Nacional at the Spanish Benevolent Society. Like that expat hangout, this 24-seat nook specializes in traditional tapas like gambas al ajillo and patatas bravas, and for the entrées, chef Felipe Camarillo, late of Suba and Marichu, focuses largely on paellas and fideuas, which substitute Spanish noodles for rice.” Status: Not Open. Opening on Friday. 259 W. 19th Street; 212-462-1000. [NYM]

3) Bed-Stuy: A helpful tipster sent us the following note (and above picture) regarding the opening of Peaches Market Café: "Hi! I walked by the soon-to-open Peaches Market Cafe (the new restaurant from the folks behind Smoke Joint and Little Piggy in the old Petit Bassam space) site today and saw this sign out front." Further investigation reveals this video interview with owner Craig Samuel from blog Renovating on the Cheap where he describes the restaurant as: "an urban farmhouse" featuring contemporary American with Southern influences, and a menu that will change frequently contingent on the greenmarket offerings. Status: Not open, scheduled to open next Friday. 393 Lewis Avenue, Bed-Stuy; no phone yet. [Eater Inbox]

4) Brooklyn Heights: The second location of anti-wifi eatery Tazza was reported open the other day according to BrooklynHeightsBlog. They write: “Neighborhood favorite Tazza opens their second location at 72 Clark Street today, at 7am. Don’t know if there are any plans for sidewalk seating, but the inside looks nice. No word yet what will be their laptop/cell phone policy, but it is assumed it will be the same as their Henry Street location.” The offerings per the original feature the usual Italian wine and cheese selections as well as coffee, tea, and baked goods. Status: Certified Open. 72 Clark Street, Brooklyn Heights; no phone yet. [BrooklynHeightsBlog]

5) Windsor Terrace: NYMag also reports on the opening of Lia’s Ices, a welcome summer addition to the nabe offering Benfaremo ices and Ciao Bella gelato and sorbetto. Also, some of the more interesting flavors have a curious source: “ As it turns out, that old Italian guy is none other than erstwhile (and not that old, really) restaurateur Gino Cammarata, who, as ice-cream freaks know, is to gelato what Eric Ripert is to fish. Lia’s owner Frank Krug, you see, met Cammarata at the Alaska Sun tanning salon in Bensonhurst where Cammarata recently set up a makeshift gelati operation (tough economy!), liked what he saw, and enlisted his services. And who’s Lia? That would be Krug’s gelato-crazed niece.” Status: Unknown, no phone. 471 16th Street, Windsor Terrace, no phone. [NYM]

6) Lower East Side: And finally, Urbandaddy has the scoop on the opening of Macondo, a new eatery/drinkery from the Rayuela folks they claim will soft-open Wednesday. Here's the deets: "The draw this time around is a range of communal Latin drinks, like sangria served in fishbowls, the Quemada (a Galician witches' brew that comes out in full flame) and the porrón, a glass pitcher that pours straight into your mouth. For food, you'll have your pick of some of the best street food in the western hemisphere—also available through the taco-truck style opening in the front—and a Brazilian juice bar that serves up cocktails and virgin juices." Status: Not Open. Soft-opening Wednesday. 157 E. Houston Street; 212-473-9900. [UD]