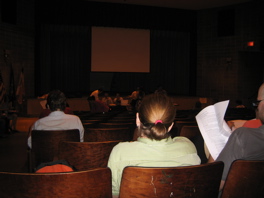 Nothing says summer time like an empty high school auditorium—and apparently, nothing says summer like denying liquor license recommendations, either. Here's the wrap up from last night's unusually empty Community Board 3's full board meeting:

1) Denied for License Renewal: Three Monkeys (due to a congested Rivington St.), Hop Devil Grill (due to prior violations for selling to minors), and 4th and B's China One, which is "more akin to a nightclub than a full service Chinese restaurant."

2) New liquor license recommendations were granted to the following establishments, with provisos about closing early and keeping the noise level low: what is assumed to be Gabe Stulman's place, Penmanship, Dishful, and LES Sushi. Update: According to CB3, since Stulman did not submit the proper paperwork agreeing to the board's stipulations, he will have to try again at the September full board meeting.

3) The Annex was denied a cabaret license because community members said it just can't handle noise and crowding.

4) Label Lounge, Lok Sing Chinese, Friend House, Obrigado, Zerza, Rolo, Pho So, and the Kelley and Ping space, were all denied transfers, alterations, or upgrades. UPDATE: All aforementioned restaurants (except Friend House which didn't show) were denied upgrades, alterations, and transfers unless they agree to a certain set of stipulations which include certain closing times and noise levels. According to Zagat Buzz they "passed muster" and are set to go to the SLA.

5) New liquor license recommendations were denied to the following unfortunates: Mitchell Banchik's unopened "bar/grill" at 114 Third Avenue. Committee members fretted over the apostasy- a bar/grill in a former church- and deemed it not in the community's best interest. Cinq a Sept was also shot down in the name of god- a Buddhist temple looms nearby as do three other establishments within 500 feet of their location.

6) Eda Kilic's new restaurant, opening on the previously barren stretch of 13th Street between 1st Avenue and Avenue A, was formerly approved because of its Turkish menu. Its new menu, billed as "eclectic European" drew reservations from the community board, who bemoaned the multitude of pre-existing eclectic eateries. The situation was resolved when Kilic herself promised to keep unique Turkish dishes center stage.

7) In the world of sidewalk cafe applications, last night's losers included the LES' Noodle Bar and Brooklyn Bar. The E.U., in cooperation with the Fourth St. Block Association, was granted permission for a 14 table, 28 seat sidewalk cafe.
—Reporting by Caitlin Dube