One Year In: Tailor

Share All sharing options for: One Year In: Tailor 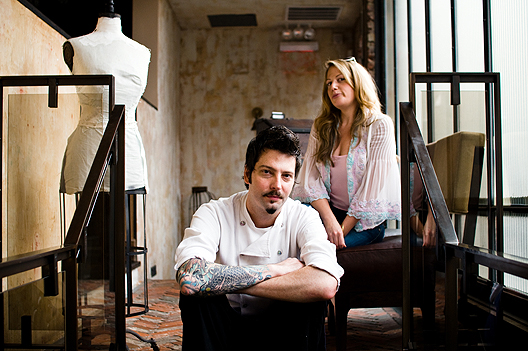 Buzz doesn't even begin to describe the press buildup prior to the opening of the now almost one-year old Tailor. It was more like a firestorm, driven by the fact that this was the first restaurant from pastry whiz Sam Mason, that this may have been the beginning of a major sweet/savory small plates trend, that the restaurant was massively delayed, and that Mason himself was blogging about the process. Once the place actually began serving food, the critics, bloggers, and foodies of all stripes came in droves and their reactions weren't all positive. But that was almost a year ago. Let's see how Mason and one of his co-owners Lauren Weiss are doing now:

How's the year been, crazier than you thought it would be? S: I think it's been pretty on par. We left the "buzz" and went right into the summer...We originally obviously were slated to open earlier...But you know how construction goes. Why the big delays? S: Construction. It's called opening a restaurant...it was departments of the city that try to make it hard.

And then how did the opening go? L: It was quick. We sort of launched right into it. It was three sort of dinners. S: A quick friends and family and then the deep end. L: I was going to say onwards and upwards, but...

And when did it start to die down? S: Once the summer finally hit, that's when things began to taper off. L:We didn't go through that thing where you have an onslaught. S: We had that other kind of mentality where people assumed it was impossible to get into this place and decided to wait. It gave us a little more of a steady flow. You didn't hold back the books in the beginning? S: We probably did the first few nights and then were like, this isn't super necessary. L: We didn't want to be that super hot place that then died out. We did want to try to get along with our locals and our neighborhood people.

How do you avoid problems with the neighbors? S: Not having a nightmare crowd every day of the week. L: We did 40 percent reservations in the beginning, so we really allowed for a lot of walk-ins. S: There's nothing worse that being denied to get into a place.

So when did the critics come in? L: The second day we opened. How did you receive the first reviews? S: They were probably expected. Just the mentality of the reviews I think. It was so shrouded in mystery how this was going to play out, even to us...It was a learning process, and it's kind of a shame our learning process had to be what was criticized. L: I feel like there should be a couple of months allocated. S: Yeah, I think we got our review in five weeks...And they had a field day with us. It was fine. Whatever. They're critics.

Did you change the menu or did you change the restaurant after that? S: We changed the dining experience, but nothing changed as far as the original concept. It's just the dynamic of the meal. How has it evolved? S: It was originally a small plate concept with sweet and salty which I still think is an awesome scenario but people can't really wrap their heads around it. And it was kind of a nightmare for the kitchen, just the way that people would order haphazardly...we just decided to start serving people appetizers, entrees, desserts.

If you had it your way, the critics wouldn't all come in the very beginning. S: I've been in New York City for a long time and I've worked in a lot of restaurants and I seem to recall when there was a six month period where you got your grounding and they came in and they were advocates and they were champions of restaurants...now the first person to devastate a restaurant seems to be the ones to get their voice heard. It seems more blood thirsty now. S: That's the reason why Chicago is the best food city in the country. They're more champions of restaurants in other cities than currently in this city. Would you want them to come back now? A re-review perhaps? S: Doesn't matter. I'm fine with them going on to their new restaurants to bash.

Getting to the cocktail program, was it a surprise it became such a huge thing? S: No, we had big dreams, big dreams. The beverage program is 50% of our restaurants. It's the era of mixology, so it helps that we have a stake. You are riding the mixology wave, but were you also riding the savory/sweet trend? S: It just so happens that me and Pichet opened up at the same time...And you know, no one is doing it like we're doing it. No one seems to have realized that it's not easy to go from being a pastry chef to what we're doing here and I don't think we got a lot of credit for how good the savory food is here. It's not like Pichet or Jehangir, who are doing small plates with these combined ingredients. These are highly composed savory dishes that are really delicious...We have been criticized for and have been compared to a lot of great restaurants, but I was slinging Twinkies a year ago. This isn't easy as far as my background, you know.

What have you learned about running a kitchen and running a restaurant this year? S: Running a kitchen is easy it's just trying to stay creative and keep pushing that envelope especially in a type of cuisine where I'm kind of green. And what about tweaking the front of the house? S: That tends to be the more complicated parts of running a restaurant...there's a certain amount of precious service you want to apply but you don't want to be stuffy...You start to lean towards casual dining, it starts to screw up the precious thing you had, not precious, I mean formal. It's hard to translate to your waitstaff.

Any big plans on the horizon? S: I'm sure we'll go to seven days soon, as soon as the season kicks it. We've been talking about brunch things. Maybe we'll do brunch at the end of the summer. And you're not going to expand? S: I don't know if we'd have another restaurant. L: And we'd be pretty careful of what we put out there. S: We'd keep the next one under wraps.
· All Tailor Coverage [~E~]
· Previous One Year In Features [~E~]