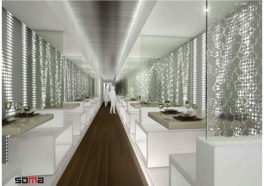 The shills have been kept to a minimum this week but a few have been able to eek through here and there. Today we have Naya, Zocalo, Parlor, and a surprising success story from South Brooklyn Pizza:

We've received a couple of livid emails from a worker at Zocalo claiming the owner has written a positive reviews and had a friend at Citysearch remove the negatives. We're not sure on the details, but the five star reviews look shilly to us: "...went to zocalo for a casual dinner with girlfriends, and we had the best time!! the atmosphere is really great, loud in the bar but very quiet and cozy in the back....The waiter told us a few menu items were new and we had to try them. all of his recommendations were delicious...the truffle quesedilla was so good i could smell it throug the whole restaurant. for an entree i had the hanger steak and as a true carnivore , it was unreal. cooked perfectly and so flavorful. we all shared churros for dessert, they were ridiculous- i mean truly amazing."
Shill Probability: 52%
UPDATE: The aforementioned tipster has been ID'd as an ex-staffer, perhaps with an agenda to defame the restaurant. We have lowered the shill probability from 62%.

The following comments for the plywooded space Naya are either total shills or their sarcasm is beyond us: "amazing!! Cant wait to try it!!!...THIS IS REAL DESIGN!! I HOPE THE FOOD WILL BE GOOD. BECAUSE LOCATION AND DESIGN ARE INCREDIBLE!GOOOOD LUCK...If its true!! its amazing!! it just look out of this world!"
Shill Probability: 75%

The following comment is a dead ringer for a shill. What's more, the only other comment this user has made has been for Parlor: "What a welcome addition to the neighborhood. I was surprised to see such high quality food and not just the steaks (which were perfectly cooked and seasoned, acompanied by roasted garlic and your choice of sauce).Nice assortment of fish entrees and great raw bar. Hama Hama oysters were fantastic....Although service needs some tightening up around the edges a wonderful dinning experience. I'll be back.
Shill Probability: 80%

And ending on a positive note, we have a success story. A tipster informed us the other day that the Yelp page for South Brooklyn Pizza was rife with shilly sounding five star reviews from first time reviewers. But, now all have been removed. He tracked the shills throughout the month: "UPDATE: Really curious how all 3 of the 5-star raves are written by users with only one review (the 5-star rave for Brooklyn Pizza). Quite curious. UPDATE #2: It appears that one of the 5-star raves has magically been taken down. 2 to go, I guess. Quite curious. UPDATE #3: Well, it appears that all of the curious 5-star raves have been expunged. Finally, a rating this joint deserves."