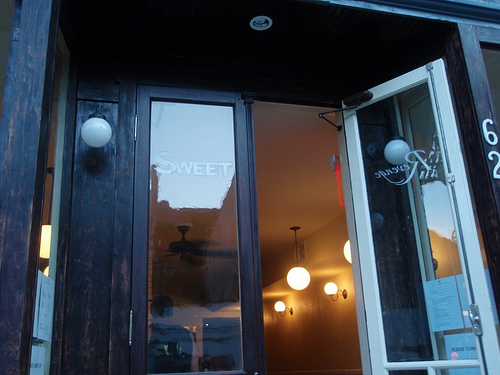 1) Tudor City: Lady Strongbuzz and NYMag both report on the opening of Convivio, Michael White's makeover of L’Impero. The former shares the following info: “White’s menu, which is served a la carte or as a $59 four course prix fixe ($49 at lunch), starts off with Sfizi (snacks, $4-5)...A veritable feast is listed under antipasti ($12-15), including bufalo mozzarella with sliced figs and rosemary oil, crispy sardines, warm pig’s feet vinaigrette, and grilled quail skewers in vin cotto.” Status: Opening Tonight. 45 Tudor City Place; 212-599-5045. [Strongbuzz; NYM]

3) West Village: Plywood alum Sweet Revenge has opened on Carmine Street according to Rachel Kramer Bussel's cupcake blog, CupcakesTaketheCake. She also posts a full review, reporting that it opened on Friday. She writes: “It is much more than just a bakery; it's more akin to a wine bar or cafe, and focuses on desserts, including plenty of cupcakes, as well as savory baked goods (perhaps to appease people like the guy who walked in and demanded, 'Do you have any real food? Like meat?')” Status: Certified Open. 62 Carmine Street; 212-242-2240. [Cupcakes Take the Cake]

4) Chelsea: A new outpost of the shuttered Union Square lunch spot, Barocco Café, has been reported open by Jeremiah’s Vanishing NY. They write: “Just opened yesterday, the place was empty and the service warm and friendly. The decor is upscale, as promised. So far, they have things like 8-dollar sandwiches, quiche, baked goods, and inexpensive salads, but they hope to soon be serving wine and possibly brunch.Brunch. On this block. Just let that one sink in.” Status: Certified Open. 110 9th Avenue, phone unknown. [Jeremiah’s Vanishing NY]

5) West Village: The once plywooded Corrado Bread and Pastry opened quietly a little over a week ago in the former Ametller space. Like its uptown counterparts, the offerings include pastries, sandwiches, breads, cookies, and other goodies along with coffee, tea, and cold drinks—a solid neighborhood addition at any rate. Status: Certified Open. 35 Christopher Street; no phone. [EaterWire]

6) Williamsburg: An outpost of Barosa in Rego Park has opened on Graham Avenue in the short lived Catch 22 space. A quick glance at the menu reveals they're serving up cheap Italian-American fare (chicken parm, fettucine alfredo, etc.) and pizza. Status: Uncertain. There was an opening party on Sunday, but the place was shuttered Monday. 321 Graham Ave; 718-782-3199. [EaterWire]