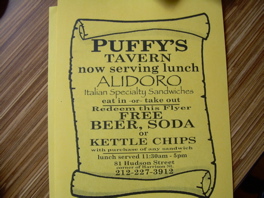 Community Board 2 wasn't the only group having some heated fun this week. CB1's Tribeca committee met last night to hash out their issues with certain clubs and restaurants and grace certain others with sidewalk cafe and liquor license approvals. It had its tense moments, but let's just say no cops were called.

1. The Tribeca club Peppers, aka Club Fahrenheit, is in the hot seat. Tempers flared as community board members discussed the most recent public safety issue- a shooting- in their ongoing battle to have the place shut down. However, since Peppers' lease isn't up in February, they have to sweat it out until then.

2. Fresh, the seafood restaurant at 105 Reade Street which recently aquired Michael Ferraro as head chef, was approved for a liquor license transfer.

3. As for Puffy's Tavern, beloved Hudson street watering hole (now serving lunch sandwiches from Alidoro), they beseeched the committee for approval of a small un-enclosed sidewalk cafe. Their request for five tables with twelve chairs was denied on account of a Harrison Street bus stop. Instead they allowed them two tables on Harrison and the two on Hudson.