Every day this week, we've featured a Shitshow Week Review—a new assessment of a restaurant that at first glance seemed totally and completely off the rails. To give these places a fair shake, we revisited to pass new judgment. The fundamental question: shitshow or not a shitshow? Here is the finale. 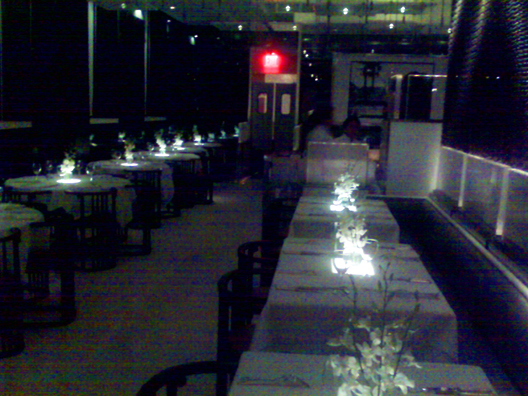 This isn't going to take long, promise. But before we get to the matter of shitshow/non-shitshow, let us all first acknowledge that Mr. Chow Tribeca—Michael Chow's fourth Chow, sister restaurant to Mr. Chow 57th Street, Mr. Chow London and Mr. Chow Los Angeles—is without question the most offensive restaurant in New York. Menus are not offered, nor are prices. The bar, empty, is for reservation-holding guests only. Tables are very tightly packed in, save for a few towards the side and rear, but those are reserved for VIPs—and there hasn't been a VIP up in this joint in 13 months. If you're lucky and the weather is favorable, you can sit on Chow's admittedly pleasant porch, but then you risk passersby seeing you be that guy—the one that still eats at Mr. Chow Tribeca. The central design element of the restaurant is a huge portrait of Christopher Walken. Although, yeah, that last bit isn't offensive so much as it's patently insane. But how about this: Dinner for four was $595 before tip and the 4 AM wakeup call via MSG/sugar haze.

Setting the Scene: There is no scene here, but not for lack of trying. The Walken photos, the under-lit tables, the remixed Coldplay—and...we just fell asleep thrice. There is also the host who insists on shaking your hand on arrival. My, Eater, what a nice personal touch! No: he doesn't recognize you because you've never met him, but he's not sure. He's hedging to see if he should recognize you from a previous visit when you introduced yourself, thanked him for the awful meal, but he was too busy fawning over Eli Manning, who'd been to the restaurant because the poor bastard didn't know any better.

Crowd: Cómo se dice, ghost town? There was one other table seated while we were there, and it was a group of middle aged women who, either by coincidence or breathtaking coordination, were all wearing red blouses.

Food: Here, we'll throw to a dining companion, a brave soul who in the face of sound judgment, agreed to dine with us: "Chow's insistence of staying with his antiquated menu of sugar, msg and what I can assume is a gelatin (sauce shouldn't ever be that thick or harden that fast unless its QuickcreteTM), is foolish. Update the menu to this decade please. It was novel in 1982, now its just stubborn."

Service: It should be mentioned that there were more waiters and bus boys than clients. Despite the lack of customers, they still manged to hustle us through a meal and mess up the drink orders. Speaking of drinks, drink refills are offered on a 10 minute loop no matter how fast or slow you're drinking, and half full cocktail glasses are cleared aggressively to make their cocktail nagging seem more reasonable.

Miscellany: Mr. Chow is still thanking Batman by handing out a brochure with the check that lists every celebrity who has ever eaten at the restaurant. Every single one. Six-panel fold-out. Really, guy?