One Year In: Perilla

Share All sharing options for: One Year In: Perilla 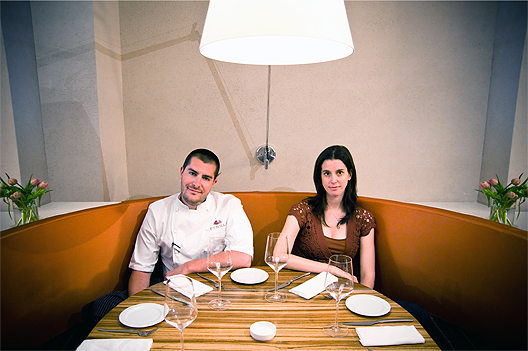 Perilla, the small West Village "neighborhood" restaurant was the first venue a Top Chef alum—and, here, winner—to actually get off the ground. The opening was covered, natch, ad nauseum. All the blogs and the papers documented its arrival and critics were on the scene in an instant. Top Chef fans made pilgrimages to see "Harold". It was a big deal. But now that all the critics have passed through, how's the restaurant doing? Has it established itself as the real neighborhood staple the owners always said they wanted it to be? For the Top Chef guy, would he do it again? We turn to owners Harold Dieterle and Alicia Nosenzo.

So, one year in, how's it been? A: It's a lot of work, but we're really fortunate. We've had so few of the many restaurant problems that can happen when you open a restaurant. How is it now compared to the beginning? H: It wasn't super crazy the first month because we held the book back a little bit. A: Most restaurants don't want to be too insane in the beginning so you don't fully book the place. H: But then we opened the book up full throttle about a month in.

A: The critics came May and June. H: Right away. A: There was no rest for us. But you saw that coming. H: Yeah. I don't think it was much of a surprise. I kinda like it when you can get that three to four month little window to get all the engines where you want them to be. We didn't get that.

And what about now? Any slowdown?

A: I think the beginning of the year everyone was freaking out because of the economy and because of the Bear Sterns thing. But I think we were nervous prematurely. What are you expecting for the summer? A: We get a lot of visitors over the summer, and a lot of visitors still come to see Harold. You're still getting customers because of Top Chef. H: Oh yeah. At the beginning it was a lot higher of a ratio. It may have even been even at some points, but now we have a great neighborhood following, a lot of locals coming in to support us.

So if you take a look at Perilla now, is it where you imagined it being? A: We always had a vision of what we wanted, a great neighborhood restaurant that's not pretentious, that's warm with great food. And I think that's what we have. H: But there's something to improve upon every day. There's never been a day where we turn to each other and say "Done." There's always something to improve upon.

What little nips and tucks do you still want to make? H: I'm always sussing out ingredients. Trying to make the food tighter and work on stuff. A: We opened on such a small budget too so it's just been piece by piece adding little things, changing little things. For example... H: First off our art budget was very small. We didn't have these pieces over here. We got a refrigerator for behind the bar...I'm buying myself a pasta maker. Just little things.

And what about menu? H: I've just gotten through my first year of seasons. A lot of chefs say they need three months to really hit their stride, and I wanted to believe that, but for me it took a lot longer. I think the last two menus I've put out were really really solid.

Did the reactions of the bloggers and the online reviewers come into play when working on the menu? H: Absolutely. You know if you have a new person in the kitchen at a new station, they could have been a little heavy handed with the salt. I find out the food is suffering and that I need to police this guy more. And what of the critics? H: Food is a very personal thing. Everyone has an opinion about it. Some of the reviewers had good angles, and I agree with them. Others, I don't. It's a constructive thing.

With Top Chef, knowing what you do, would you do it again, would you do it differently? H: I wouldn't do it. I don't think I could go through with it. I don't regret doing it, but it's really hard and it's not just the cooking. It's all the other stuff. Did it prepare you in any way for opening the restaurant? H: I think it really makes you adjustable and adaptable and you can roll with the punches and handle any situation.

What about the other contestants. Why haven't many followed in your footsteps? H: What I did was totally different. We went out for a year and raised money and looked for a space and looked for a space some more and watched deals and had investors fall through. It's kind of like the chicken before the egg. You have all these successful restaurateurs, and it's no big deal because they have all these investors. Previous contestants...I just haven't seen a lot of them come through that have that experience or have that partner.

A: You need to have a full team. You can be the most talented chef in the world but if you don't know how to get a liquor license or how to make money...H: She went away and I handled the payroll for the first time. I paid somebody three times.

That said, when you opened, your notoriety definitely came into play. H: We really tried to control that monster, but it didn't happen. There was really no way. We didn't have any mention of Top Chef stuff on our website or our business plan. We have a ten year lease here and we want to have longevity. A: You don't want to burn out at the beginning.

Speaking of the lease, is this the kind of place that has a 10 year life span. Is this a stepping stone, the first in an empire? A: I would definitely like to see us do well through the life of our lease....And if you were to open another restaurant, what would you do differently? H: Hypothetically speaking, I think we'd have more of a budget. Give ourselves some room. We thought we were going to run out of money and we wouldn't be able to open. We thought we would have to go back to investors to ask for more money. A: We didn't have to. We totally stayed under budget which is...H: Unheard of. A: We were really lucky.