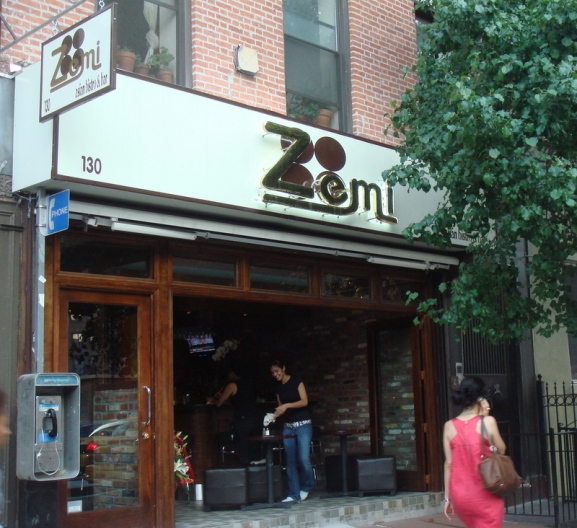 1) Carroll Gardens: Fresh on the heels of Café Gray’s closing comes the opening of shaved ice/dumpling house Eton, named after Cafe Gray alum, chef Eton Chan. TONY had word of it last week and a tipster clued us in to the opening party being held tomorrow. They share some menu info as well: “To get a better idea of the of Eton's, the menu consists of dumplings (5 for $3.50), hand-pulled noodles and Hawaiin shave-ice with a variety of flavors (strawberry, green tea, guava, lychee, etc.) and toppings (vanilla ice cream, red azuki bean, mochi, fresh fruit, etc.).” Status: Not Open. Opening tomorrow at 3pm. 205 Sackett Street; Carroll Gardens, no phone yet. [TONY]

2) East Village: Multiple sources have reported on the opening of Mercadito Cantina, the new taqueria adjacent to the East Village original that opens today according to Metromix. They write: “[It’s] an updated take on the traditional taqueria with salsas, guacamoles and tacos made with high-end ingredients (think grass-fed carne asada and Berkshire pork carnitas) and a DIY attitude (think make-your-own tacos, with meats available by the kilo).” Status: Certified Open. 172 Avenue B, 212-388-1750. [Metromix]

3) Cobble Hill: TONY listed Chocolate Room, ( not to be confused with Chocolate Bar), in their openings section last week, claiming that: “Husband-and-wife team Jon Payson and Naomi Josepher have opened a second location of their Park Slope dessert shop, in Cobble Hill.” But a Brownstoner walk-by on Thursday makes the opening news seem premature: “It definitely wasn't open when we walked by the other day, and nobody's picking up the phone.” Status: Unknown. No answer to calls. 269 Court Street, Cobble Hill, 718-246-2600. [TONY; Brownstoner]

4) Chelsea: A tipster writes in with news that Asian bistro Zemi has opened on 9th Ave. They write: “The short lived sushi spot on 9th Ave between 18th and 19th has been replaced by Zemi 'asian bistro & bar'. The space is totally redone and looks pretty cozy with a fully open front. I was a little worried about the menu, which is half American bistro fare and half American Chinese, until I found out the restaurant is owned and operated by a longtime Vynl alum.” Status: Certified Open. 130 9th Avenue; no phone listed. [Eater Inbox]

5) East Village: TONY and Lady Strongbuzz both have it that the recently shuttered Chocolate Bar has reopened in the East Village as of today. The latter shares this info: “Just steps from Tompkins Square Park, Chocolate Bar will feature the same line of retro chocolate bars (salty pretzel chocolate anyone?), bon bons, and rich hot chocolates as the West Village location, along with a new line of Artisanal Egg Creams served in the café and at the restaurant’s counter seating (seats 8-10).” Phone calls confirm open status. Status: Certified Open. 127 East 7th Street; 212-366-1541. [TONY; Strongbuzz]

6) Lower East Side: Another tipster writes that Dash Dogs on the Lower East Side has been replaced by the curiously-named Neighburrito. Menu details are scarce but the descriptive nomenclature implies that burritos and other Mexican items are the specialty of the house. Status: Certified Open. 127 Rivington Street; 212-254-8885. [Eater Inbox]