Re-introducing you to the Eaters' Journal in which we opine on meals of the week past. 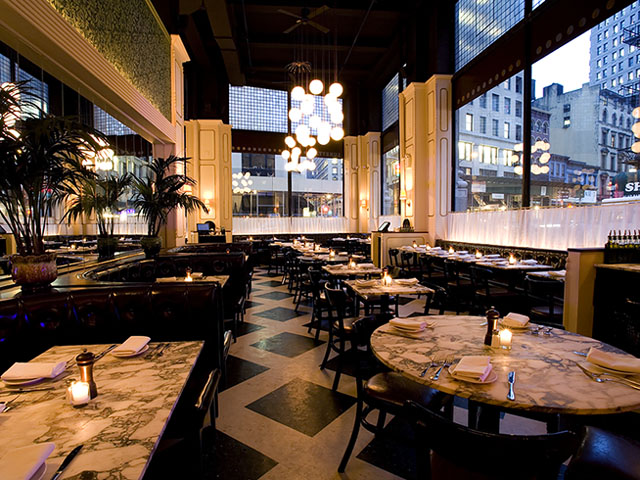 Matsugen: Very impressive, enjoyable, and unnecessarily comped (but merci, chef) week-two meal. JGV, his Prada booties confirmed on-site but, as promised, out of the kitchen and out of the hair of the Matsuhita brothers, his partners and chefs on the project. Flavors are complex, raw, and bold and, so said the eaters with more expertise than me, very true to traditional Japanese cuisine. Soba was categorically excellent. Bukkake business addressed. The space, warmed a bit from its days at 66 and deliberately half-full, remains down-the-middle Tribeca chic. Will absolutely vie for the trey from Bruni. Less certain is how New Yorkers, gluttons all of us for dumbed down flavor profiles, will embrace the food. — BL

Sheridan Square: First off, I thought the food was excellent here. A bit rich, but solid flavors. Good cocktails, good wine, Mr. Gary Robins was on the premises. Check, check, check. Those foie gras ravioli that the eGulleters raved about were spot on. But I think they're going to have some major problems filling the huge space. It's the location yes, but there's nothing cozy or refined about it. Crate and Barrel-esque. And the big open stage kitchen (with one chef wearing a bluetooth earpiece) seems superfluous. Most of the real cooking goes on behind the scenes. — Kludt

Lunetta: Sad to say, but this one may be headed for the Deathwatch fairly soon (Scarpetta, Bar Milano, etc. to blame?). An 8:30pm Saturday night visit yielded a half-empty dining room, with several menu items out of stock and noticeably slimmer portions. Shame, because the kitchen sure does know how to cook a noodle. Maybe Adam Shepard should've taken a cue form the Franks, and pursued his BK-to-Manhattan expansion in a less ambitious space. Will Mayrose come back following the execution? — Staff

Smith's: When I went to Smith's it was busy, and we waited about 45 minutes by the back bar. The restaurant is tight but cozy. Food and service were great, but we had different waiters all night, which I found weird. Here's the funny part about Smith's: the night I was there, all of the clientèle were female. It is such a chick place. The tables were all 30ish women in big groups or two tops. No men, not even on a date. It was like being in someone's book club. —Curb

Hibino: Everything just seems to work out here; somehow the disorganization that rules the front of the house charms when it would chafe elsewhere. Our four top tried every one of the Obanzai on Monday, split entrees from both the sushi and the kitchen side of the menu, and still got out of there for $50 apiece including drinks and dessert. Must haves: eel croquettes, anything with the short ribs. When are those adorable soy milk pudding jugs going to show up on the shelves at Fairway? — Crafton

Nha Trang: I stopped by downtown Vietnamese standby Nha Trang on Baxter last night for a pho fix and was glad to see that place is still turning out an excellent bowl. As always, you don't come here for the ambiance: My dining companion and I were led to a table crammed in a nook by the front door, which was partially blocked by a stroller containing a loud, unhappy baby. Also, there's the matter of the harsh lighting and the general lack of decor. But the soup is still good as ever. — Price