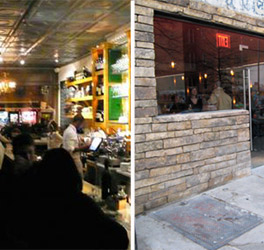 Odds choices for the Restaurants page, these, as neither is a restaurant. But it is booze week at the Times and as a pair these are on message; plus, we don't have a choice, so on we go. In re the matter of Gottino, though Jody Williams is an investor and hands-on consultant in the kitchen, the food isn't the focus here. We have a great deal of trouble believing we could be looking at more than a very enthusiastic Good. Terroir on the other hand is vying for a star, because we've got a full-time chef on premises and they're not downplaying their food offerings. As for the relevant data points, Marco Canora and Paul Grieco's other restaurants, Hearth and Insieme, both have two stars, so the side-by-side comparison review gets Terroir one at best. Back to Gottino for a second. Williams last got one star at Morandi, which is another way of saying Gottino looks primed and ready for the rare positive goose egg. Bet as you see fit, naturally.
· Gottino/Terroir [NYT; after 8:00 PM]