Share All sharing options for: The Shutter: The Southside Cafe, Epoque Bar & Grill

For the most part, it's been a good week for the city's restaurants. Only the two following places met their demise since the last Shutter Report. Know of anymore? Do tell. 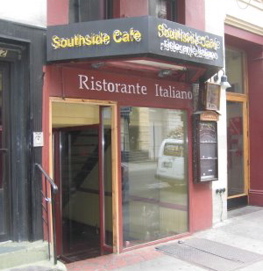 1) Times Square: Lost City brings word of a shutter in the Theater District "The Southside Cafe on W. 47th Street appears to have suddenly folded. The interior has been swept clean of furniture, pictures and wine. No sign was posted in the window saying it had closed, but no one answers the phone. The 14-year-old old, hole-in-the-wall Italian eatery was a favorite secret of theatregoers. The Southside was no landmark, but Times Square has lost another affordable, independent restaurant." [Lost City]

2) Hell's Kitchen: Sometimes turnover is so quick in this town that a space goes from shutter to plywood to open in a matter of weeks. Life with Food and Drink reports on just such a case in the HK: "I noticed that Epoque Bar & Grill, a bar/restaurant on 50th and 9th that had just opened in mid-October, was gone. But not only that-- a new bar had already taken its place. Hibernia looks vaguely Irish-ish and definitely more downscale than Epoque...more along the sports bar vein than see-and-be-seen." [LWFAD]
—photo