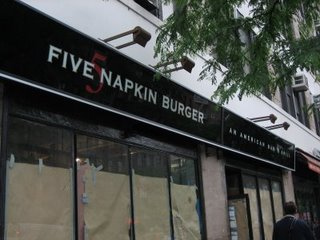 1) Hell’s Kitchen: A number of sources have reported on the opening of 5 Napkin Burger, a spin-off of Nice Matin from Andy d’Amico of Marseille and Nizza. Here’s some details via Thrillist: “5NB's a cow-centric pleasuredome devoted to its namesake: a 10oz, comte-cheese-topped meaty prima donna so acclaimed at UWS resto Nice Matin the owners decided to honor it w/ its own restaurant. Besides the signature 5NB, supporting burgers include the Rarebit Bacon (8oz, white cheddar), the Ahi Tuna (ginger, scallions & soy, sesame egg roll), and the Lamb Kofta.” Status: Certified Open. 630 9th Avenue; 212-757-2277. [Thrillist; NYT; AHT]

4) Park Slope: OTBKB reports on the opening of Le Taq, a new tequila bar and offshoot of La Taqueria on Seventh Avenue. Here’s some info: “Le Taq has a huge selection of tequila, as well as a big menu of cocktails and wine. I had a drink called, Rachel's, a really sweet purple/pink punch with, I guess, tequila. Whoa, was that strong. People were eating at tables in the back. With a new bar, nice lighting, big Mexican murals on the wall and a dining room in the back, Le Taq is set to be a real hit on Seventh Avenue just a few doors from Santa Fe.” From speaking with La Taqueria staff, it appears that the restaurant shares the same address and phone. Status: Certified Open. 74 7th Avenue, Park Slope; 718-398-4300. [OTBKB]

6) Clinton Hill: Brownstoner has the word on the opening of Bar Olivino which soft-opened over the weekend. Some menu deets: “As we previously reported, offerings will include charcuterie and olives in addition to beer and affordable wines by the glass.” Status: Certified Open. 899 Fulton Street; 718-857-7952. [Brownstoner]