One Year In: Hill Country

Share All sharing options for: One Year In: Hill Country 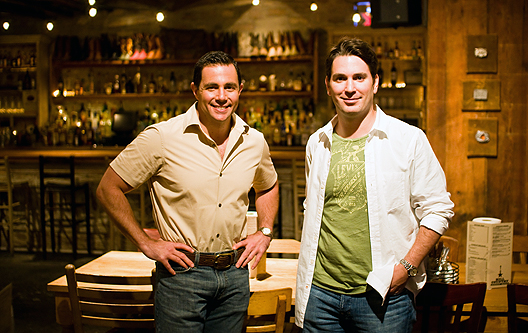 Hill Country, the ginormous barbecue palace in the Flatiron District, is one of many restaurants dedicated to smoked meat to open in Manhattan over the last few years. However, unlike some of its brethren, HC was commercially and critically successful from the get-go and according to owner Marc Glosserman and operating partner John Shaw, it remains just as busy today. They had the usual setbacks— they went 100% over budget, ran out of food, and lost a pitmaster— but have recovered and are planning to expand. Did Hill Country grow into everything the owners dreamed it would? And how will they do things differently the second time around? We turn it over to them.

So, one year in, how's it been? M: It's a big relief to have this first year under our belt. It's really been an incredible ride as far as having a successful launch of Hill Country last June. We opened up during the weekend of the block party so it was utter chaos. So we were doing six thousand, seven thousand servings at the Block Party plus all the opening week. It was a good way to get your name out. M: Absolutely.

J: Go big or don't go at all. We were on a business trip recently looking at the possibility of expanding and we got a little bit of a chance to reflect on this incredible year and what we've done. It's kind of like having a child that is, you know... thriving. We built something from scratch that has a healthy life of its own now.

Did you expect it to be so hard? Have you opened restaurants like this before?

M: John's done this before and this was my first one. I think that on the one hand there was the element of being naive, but on the other hand trying to open a restaurant in New York City on this scale and this ambition, I think you underestimate how much work is going to go into trying to pull it off and make it a success.

Were there any challenges right off the bat that you weren't expecting? M: The first one was my son was born on opening night, so that was unexpected. He was 12 days early. The other thing is there's been a number of things that we conceptualized in our heads and on white boards that in executing turned out a lot differently.

Did you end up changing anything major? J: We embellished on the original a lot. We have provided table service for cocktails. We have a much more extensive dessert menu, we have a live music venue...you have to be flexible and adapt as you see what works and what doesn't work. What was hard about it was figuring it out from scratch.

What was an early problem that you encountered? J: In the beginning we made it work in an inefficient way. We had twice as many people working here as we need now. M: We also ran out of food on a couple nights, so as a result until we understood the ebb and flow of our demand, we overproduced. So in the first couple months, it was busy all the time? M: Pretty much out of the gate it was pretty busy and one of the things that really surprised us is we had been about open three weeks and there was a Wall Street Journal article that came out that was a whole national review of barbecue and it named the top ten barbecue restaurants in the country.

That must've added to the pressure. M: Yeah, we ramped up pretty quickly. There wasn't a whole lot of time. Frankly we would have loved to have had a little bit of a slower ramp because barbecue is one of those things that is so difficult to get right out of the gate. And to just have time to work with the equipment and the smoker. We didn't have time to practice, most of the practicing happened in backyards.

Would you say it's still a work in progress? M: It continues to be a work in progress. There's construction work going on today right in this room. We have time to pay back construction and then have money to spend. J: We got some high praise from some of the pitmasters that were here for the Block Party that had been here a year ago and said that our barbecue had improved. We work every day. We taste the food three times a day.

Do you ever share tips with the other pitmasters? J: Absolutely. Barbecue is about big stories. Marc and I are students at heart. We don't think that we know it all, and I've learned from some of the best restaurateurs that I've worked with to always be in that mode of being willing to listen and willing to learn. And in terms of constant improvement, it's about allowing creativity of the team members.

And speaking of the team, what was the impact when your original pitmaster Robbie Richter left. Would you consider that one of your major stumbling blocks? M: When we parted ways with Robbie it was definitely challenging because we were a new restaurant and our reputation was not yet solidified...But Pete Daversa, the pitmaster now, really is very passionate about barbecue. Part of doing this—doing 900 a night—is having a a really deep bench and having people who are trained.

John, you've worked in a number of restaurants. Was this similar to other chef turnovers you've experienced? J: There have been chef turnovers but here the concept it the king. It's not about the vision of one star chef. I worked with David Bouley and at Tabla and restaurants in San Francisco and those restaurants in concept were really about the individual chef. Here the vision is really Marc's and the team that we built is about the team, not one star...it's all about overcoming adversity in business, having a confident belief that we'll get through it no matter what comes up.

And would you say that other restaurants opening around here say, oh, Wildwood, can be considered a challenge? M: I think barbecue is still an under-served market in New York and there is an unbelievable demand for barbecue. Variety in New York helps to educate people about the styles that are out there. Were you worried at all when you heard about Wildwood opening just down the street? J:To quote Danny Meyer, one of my mentors, "All boats rise with the tide." We really believe that. We wish all barbecue restaurants well. It's great for awareness, and it's so far from being oversaturated in New York.

And as far as the future goes, you're planning on expanding? M: The thing that we're looking into right now is we're launching Hill Country Catering and Events. The goal is to recreate this experience of the restaurant in your backyard whether that's your party on the beach in the Hamptons or someone's corporate event on Wall Street or someone's home in Westchester. What about another restaurant? M: Definitely something we're in the process of exploring. We'd like to open another Hill Country and we're taking our time. We want to see what market, based on the success we've had in New York, would be good places for us to model. We're looking at other cities, we are deciding if we should do something on the same scale.

What would you do differently this time around? J: There wouldn't be as much questioning of what was going to work and what wouldn't. We'd be a much leaner team. We wouldn't overstaff. Would you keep the same size space? M: There are a lot of great elements but there are a lot of inefficiencies in this space as well. I didn't really know because it was my first restaurant what to look for and sort of all of the booby traps. Like? M: Well, we exceeded our construction budget by almost 100%. And part of that was because in the due diligence process looking at this space, I didn't really know that I had to replace all the plumbing, we'd have the replace all the electrical, we'd have to put in new HVAC.

So it will be easier this time around. M: A lot of it is luck and good fortune. While things worked out well for us in this location and we're wary of the fact that it will be a lot easier this next time around, the second one presents a whole different set of challenges. Many successful restaurateurs have told me that going from one restaurant to two restaurants is a lot harder than going from two to ten.

But you plan to keep this one open for as long as possible? J: Hopefully for at least 20 years. M: I have a real personal and familiar connection to this food. I have a lot invested in this one.
· All Hill Country Coverage [~E~]
· One Year In: Perilla [~E~]