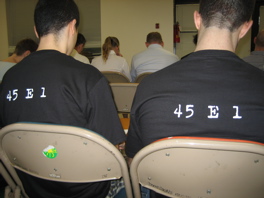 Last night, a typically fired up Community Board SLA & Economic Development Committee heard the pleas of dozens of restaurateurs wanting sidewalk cafes and new, upgraded, and transfered liquor licenses. In terms of the street cafes of course there was much unfurling of architects' plans and precise counts of where each seat would be placed in relation to the placement of the table in relation to the the placement of the restaurant on the street. We left oh, about five hours in, but here are some highlights:

1) Friends of JoeDoe turned out in uniform to support the "neighborhood American" First Street restaurant of chef/owner Joe Dobias and partner Jill Schulster. The thirty seat restaurant, which occupies the former Quhnia space, scored approval for a full liquor license, but remains aware that this is not a license to party. Small batch artisan spirits will be served (though the brunch menu is currently void of a Bloody Mary) as will the needs of the First Street block, which include keeping noise levels down, and, more appetizingly, a promise to "combat the rats."

2) Meanwhile, a more established East Village denizen received a lesson in futility. Frank Prisinzano himself addressed the board regarding noise complaints at Frank. Apparently, residents can hear the noise inside the restaurant from across Second Avenue. Suggestions on how to reduce the noise included such solutions as closing the window after 10 pm, closing the door, and?taking reservations. Prisinzano vowed to hire staff to patrol the sidewalk and clear it of waiting patrons, but rightfully claimed that "some people just want to be seen."

3) Robert Schagrin, co-owner (with Drew Nieporent and Josh Guberman) of Crush came back to plead once more for a liquor license for his Italian place on Avenue B and 3rd and again got reprimanded and denied. He brought inadequate paperwork- and no menu- to the committee.