Share All sharing options for: Hangover Observations from Aspen: Jean-Georges is King

We've been on the ground in Aspen at the 2008 Food & Wine Classic for 24 hours now. Wylie reminded us on a ride into town from the airport that he is not and was not the fake Wylie Dufrense. Drew noted he is not on a panel in 2008, but agreed that no, he cannot be The Guy every year. And with Mario absent at his son's graduation, the king of the Aspen this year is without question Jean-Georges Vongerichten. It has nothing to do with the fact that his carry-on Prada bag is the size of our dopp kit (although we don't know how he does that) or that he's leaving Saturday morning to be at Matsugen Saturday night in NY. He's just the king. There has been eating, boozing, schmoozing and, yeh, hangovers.

1) On Jean-Georges. Men, hide your women. Is it the accent? The little Prada booties? The scarf? Whatever it is, JGV could have any women in Aspen, the local cougars included, based on the informal survey we took last night. One woman's reasoning: "He's so cherubic!" Really.

2) A question that keeps coming up: Where are all these people with skull belts and leather pants coming from?

3) Whatever crowd you ate with last night, it didn't compare to the scene in the private dining room at the Little Nell. Dana Cowin, Jean-Georges, Dave Chang, Robert Bohr, Wylie Dufresne. A Salmonella incident there would have shut down the festival.

4) Back to Jean Georges for a sec. His official out time was 12:10 AM, solo. Not with the lady with the red hot pants that he was seen with earlier.

5) At a panel just finished on growing brands (Taking it to the Next Level: How I Grew My Brand), panelist Josh Wesson on the reasons we drink wine: "First, you drink wine to make the people you're with funnier. Second, to make the food you're with tastier. Third, make your chances of sex better." Which, if not true in life, does seem to hold this weekend.

6) Sam Talbot sightings so far: zero. This might help explain the power JGV is having over the women.

7) If you want to find Tom Colicchio, look for his man-servant-agent Scott Feldman. And vice versa, because they're never more than a few feet apart. Come to think of it, this chaperoning may be contractual. Update: If it is contractual, the hat-holding, it was negotiated by TC's real agent, Lisa Shotlind. 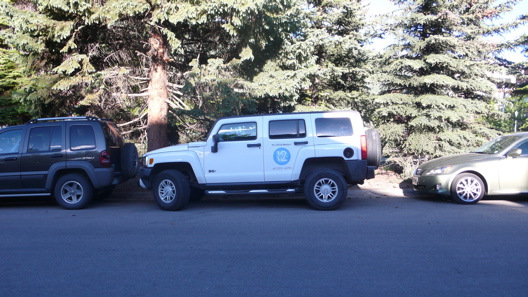