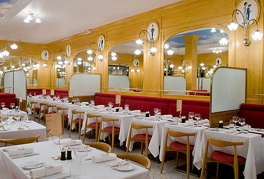 This week we have shills from the comments, the inbox, and from another blog. Again, we'd like to commend you shillers on your feeble attempts at selling your beloved restaurants. Better luck next time.

There are a couple of suspect comments on Midtown Lunch's post about Volstead's free lunch on Tuesdays. This is tricky however because a) the restaurant is already commenting under its own name in the thread, and b) since the commenters are getting free lunch they are likely to be fans. Here's the shilliest of the bunch: "Just came back with a group of 7?.excellent appetizers, very solid lobster roll, and a great experience for the whole group?.we have always had a great time there after-work for happy hour but now this just adds another dimension!"
Shill Probability: 47%

Telling people to stay away is a little reverse psychology trick beloved by shillers everywhere, including this one for Ducasse's Benoit: "If you don't like Benoit then stay away because it is already hard enough to get a table at this great place. BTW, the staff was great on my visit. From the host to the waiter, all had welcoming smiles and provided gracious service...Plus it's next to MOMA so it makes for a great lunch place after the museum."
Shill Probability: 55%

The following brief comment is mostly suspect because other reports on Elizabeth state the place has been neither busy nor all that great: "Had a great meal at Elizabeth. It's nice to get high-end food in the neighborhood without all the fuss. The place is packed."
Shill Probability: 73%

This is coming straight from the Eater inbox from what we can only assume is a rep from the restaurant: "Surprised Lelabar hasn't hit the Eater radar. It's been around for at least 6 months and while I'm not a wine expert, know enough to say that it's a damn good wine bar. Hundreds of well-selected bottles, dozens by the glass (across the price spectrum), noshing that's not merely incidental, and just the right size and atmosphere....less than 50 people, good music that's not too loud. I see a lot of the same faces week to week, as sure a good sign as any."
Shill Probability: 92%