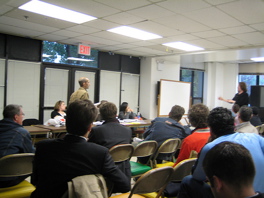 As is the norm these days, last night's Community Board 3 SLA & Economic Development Committee meeting was a doozy. Owners of restaurants and bars big and small battled the CB for the right to liquor up their patrons. Let's see who sneaked one by and who got the big hammer drop:

1) The committee rejected Ludlow Street's Darkroom for a liquor license renewal. They cited several infractions including noise complaints a few counts of selling booze to minors. The bar will have to plead its case with the full board later this month.

2) Robert Schagrin, co-owner (with Drew Nieporent and Josh Guberman) of Crush, or what he called "the most famous wine shop in the world," was on hand vying for a license for a potential Italian spot on B and 3rd. Robbie insisted it would be frequented by the sommeliers of places like Cru, Daniel and Veritas, but didn't have all the necessary paperwork.

3) The team behind Stanton Social are planning on opening a "tapas-style steakhouse" at 146 Essex in what is now a furniture shop. They said they were waiting for liquor license approval from the CB before signing the lease, and the committee granted their request. If all goes according to plan, we'll all be feasting on overpriced miniature steaks by summer '09.

4) In a case that confused the restaurant owner, the board, and everybody in attendance, Crif Dogs tried to extend their old license, which PDT now uses, to the original space. No one was sure if they could use the same license for two commercial spaces, but the committee decided to give them a pass. Beer will again be served downstairs.

5) A "gourmet burger pub" from the folks at Common Ground potentially slated for the old Rapture Cafe and Books space hit the skids as the license transfer was denied. The committee noted that the new establishment's operations would substantially differ from the terms in the space's still-existing license.

6) The board pleased any Japanophiles who will be able to get tanked at some point in the near future at noodle shop Souen (6th between A and B) and robata-style cooking joint aptly named Robataya (9th between 2nd and 3rd).

7) Applications for spots falling in the Resolution Areas (Fu Sushi on ave. A bet 11th and 12th, San Marzano on Clinton at Rivington, and Rama on 1st at East 2nd St.) got the expected hammer drops. A quick piece of advice to anybody who is going to apply for a new liquor license in the CB3 resolution areas...don't.
—Adam Haas
· First Word: CB2 vs. Boqueria, Scuderia Gallo at 10 Downing, Turks & Frogs [~E~]