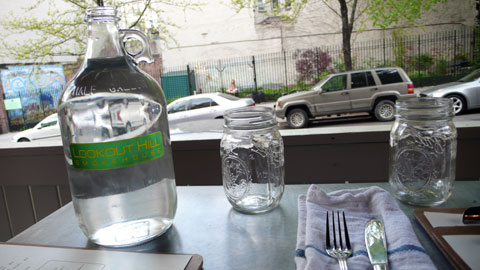 1) Park Slope: TONY reported last week on the opening of Lookout Hill Smokehouse in the old Biscuit BBQ space. Then on Friday, Brooklyn Paper confirmed the opening, and checked in with these deets: "'It’s a kind of elegant barbecue,' said proprietor Rob Hirsch, who also owns Cornelia Street Cafe in Manhattan. 'We have this very cool smoking equipment which comes from Tennessee. We’re smoking all the usual stuff: brisket, pork belly, kielbasa and ribs, in addition to lamb and specials each night.'" Status: Certified Open. 230 Fifth Avenue, Park Slope; 718-399-2161. [Brooklyn Paper]

3) Red Hook: Update: Annabelle's, (mentioned in a previous report), the new Neil Ganic eatery in the former Lillie's Space opened last Wednesday night according to a tipster who writes: "Looks like Neil may have had a friends and family preview across from Ikea last night. the place was totally packed -- both the old Lillie's space and the new restaurant next door." Phone calls confirm a soft-opening. Status: Certified Soft-Open. 44 Beard Street; Red Hook; 718-643-1500 [Eater Inbox]