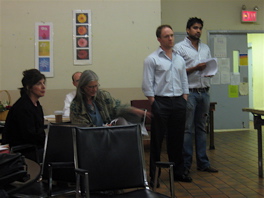 Last night's raucous CB2 Business Committee Meeting was packed with noise-hating neighbors and a slew of restaurant owners begging to serve booze. Though the committee was tough, a few restaurant owners squeaked by, especially if they offered to abide by the committee's "suggested" 2 am closing time. All restaurants will still have to go before the full board later this month.

1) Boqueria got the green light for liquor in its second location, slated to open this fall at 171 Spring Street in the former Kin Khao space. A 12 am closing time pleased the committee, and a neighbor actually came to speak in favor of the restaurant because of its commitment to fix the exhaust system.

2) Thirty-three years in the neighborhood was not enough to save Da Silvano owner, Silvano Marchetto, from an intense grilling about his new place, Scuderia Gallo, opening across the street at 10 Downing. This spot will serve lighter fare, like paninis and salads, as well as breakfast. Though he claimed the building owner actually approached him about the restaurant because they knew he was such a good neighbor, multiple tenants of 10 Downing came to complain about noise. A woman from the Bleecker St. Residents Association claimed that more people want to complain about Da Silvano's noise but "are afraid of what might happen to them."

In the end, the restaurant agreed to close at 2 am, shut its windows at 11 pm on weekends, and nix an outdoor alley of tables, which was enough for the committee.

3) The owners of Turks and Frogs also got approval from the group. They plan to open a Mediterranean cafe-type restaurant at 765 Washington Street, serving cold food only. They plan to have a backyard garden with a heavy-duty tent to keep the noise down.

4) A couple of guys who own O'Hanlons on 14th Street came to the committee, hoping to get a liquor license transfered from the current owners of Vig Bar at 12 Spring Street. They plan to take over the space, add food, and have a DJ four nights a week. The problems began with the discussion of the DJ, as a picky board member demanded to know what kind of music the DJ would play. The owner responded "popular music," Board member: " That's not good enough. Give me specifics. It could be loud music with cursing language or lovely lounge music."

Soon after this exchange, community members got in on the action with a long list of noise complaints and accusations of underage drinking. One called the bar a "piece of garbage" and said that if the new owners don't plan any renovations and changes, it's an "insult to the community." The new owners clearly didn't expect this outburst and decided to hold off on asking the committee for approval. They plan to come back next month.
—Erin Sikorsky
· First Word: CB1 Lightens up on Licenses [~E~]