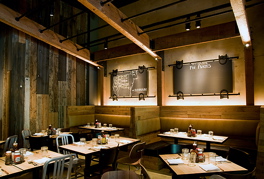 In this special edition of Adventures in Shilling, we are only calling out shills we found in the Eater comments. You sneaky devils. Did you think we wouldn't find you? Thanks for playing and do come back for another round next week:

We're calling out the following comment on the WaffleGate post as a somewhat low probability shill, only because things get murky once waffles are involved. Some people are just nutters over Wafels & Dinges: "These are the best waffles ever and identical to the ones they sell at street vendors in Belgium! I'm sorry but you cannot replicate those with a waffle iron. Plus honestly I don't mind paying for quality..and for those waffles every penny is SO worth it! I can't wait to go to Brooklyn and get some more asap..."
Shill Probability: 42%

Wildwood has received a number of raves from all the usual bloggers and online reviewers, but we think the following comment skews a tad shilly: "... it was the best bbq I have had in NYC. I was a huge fan of Hill Country, but honestly Wildwood blew me away. I read that the pitmaster at Wildwood used to be at Hill Country and he really stepped up his game here. The ribs, pulled pork sandwich and brisket were all amazing. The cornbread was even the right texture, not too moist and not too dry. I am not a big dessert person, but I had to try the smores and they topped off an already fulfilling meal. This is a great addition to the NYC restaurant scene. I say try and get there asap before it becomes so popular that reservations are impossible to get!"
Shill Probability: 65%

This shill comes from someone who ate at the very recently opened Cafe Society over by Union Square: "I was at Cafe Society last week and I had an amazing time. The bartenders and staff were extremely friendly and accomodating. They only had three menu items that night (they were not fully open and they were just testing things out), but the ribs and the meatballs were out of this world. Their drink list is very creative and there's certainly something for everyone. Very swanky atmosphere. The only thing I am upset about is the fact that they are sure to be very busy every night and it is going to be hard to get a table!"
Shill Probability: 88%