Share All sharing options for: First Word: CB1 Lightens Up on Licenses 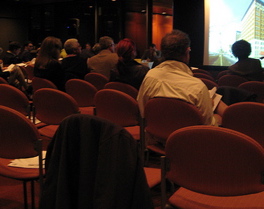 Last night's full Community Board 1 meeting went delightfully smoothly. Barely any bickering. Liquor licenses all around. But of course, it wouldn't be a CB1 meeting without at least one mention of their nemesis David Bouley. The full report:

1) It was a good night for suds slingers at last night's meeting. The board agreed not to oppose any of the liquor license applications/transfers that the individual committees approved (Regan's Pub/YourAsian/ Tokyo Bay/ Jour et Nuit/ a business at 40 Broad Street/ Vidhan Foods). But, Atomic Wings and Osteria Casano were denied and tabled, respectively, with no representatives from either to speak.

2) Guess who came up again?! That's right, Bouley was mentioned in the Adoption of the Minutes as the executive committee resolved to further research just exactly how that wily David got the names and email addresses of all of the board members. They also weren't too happy with his lawyer suggesting a board member recuse herself from the vote. Day late and a dollar short board, but maybe the story isn't completely over!
—Adam Haas
· First Word: Keep Those Hipsters Off the Sidewalk [~E~]
· First Word: CB1 Gives Go-Ahead to Smyth, Drops Hammer on Atomic Wings [~E~]