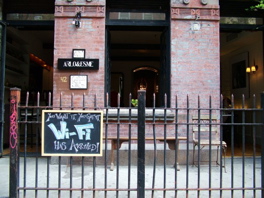 This week the shills come from a variety of places including an unusual one, Grub Street's regulated comment section. Good to see these people are getting around, hitting up not only Yelp and Citysearch, but also the restaurant blogs. We respect the moxie, but we have no choice but to call you out:

The following quote from the Eater comments regarding the new coffee shop/bar Arlo & Esme could just be from someone who loves them some free wifi. Or, more likely, it could be a shameless shill: "I just came here tonight to get some work done with friends and I just say it's an awesome joint. The pictures here don't even do this establishment any justice. It's a Tuesday night, so the basement lounge is kinda quiet but I can totally see myself partying here this weekend. Since they have wifi, it's a great place to get work done too. This is going to be my new hang-out."
Shill Probability: 38%

A reader sends in one of the rare shills we've seen in Grub Street's comments. Nygal05 writes about Cho Cho San: "I was here last week and it was delicious. I ordered lots of special rolls, and loved every one--especially the decadent Wall Street roll! Definitely a fantastic addition to the neighborhood." And the tipster calls her out thusly: "First of all, NYGAL05?!? Fuck that. That is the most generic, had to be thought of by a stupid PR girl name I've ever seen. Second of all, no non-pr humans use the word decadent when talking about sushi, and don't get me started on the 'addition to the neighborhood' comment." We're with the reader.
Shill Probability 67%

We would rank this Maremma comment as having the highest shill probability, but it's almost too crazy. It could just as easily be from an over-excited super fan: "Cesare is the best Tuscan chef in the US of A...so who cares about the rumours.i will continue to go to Maremma. I love Tuscan food and Cesare is the best in Italy/Tuscany. This is a well known fact in Italy - TOO bad for those who don't understand this. it makes me very mad that we have such a great chef and we can't appreciate the great food. SHUT UP and GO EAT THERE!!!!!!!!"
Shill Probability: 72%

The last pick, from the Yelp page for Benoit, would be all-out atrocious except for the fact that the reviewer only gives the restaurant three of five stars. Perhaps to throw us off?: "The grand opening is on Monday, April 21st. Benoit is French food from Alain Ducasse for the rest of us. More bistro than fine dining; expect the classics of his Paris [and Tokyo] restaurants transposed to midtown. Perhaps this new midtown outpost will save me - and others - from a trip south on the 6 to Balthazar. We'll start with three stars and go up from there once I've had an opportunity to sample the cassoulet. Bon appetit!"
Shill Probability: 88%