Share All sharing options for: FW: Wafels & Dinges a Scam? 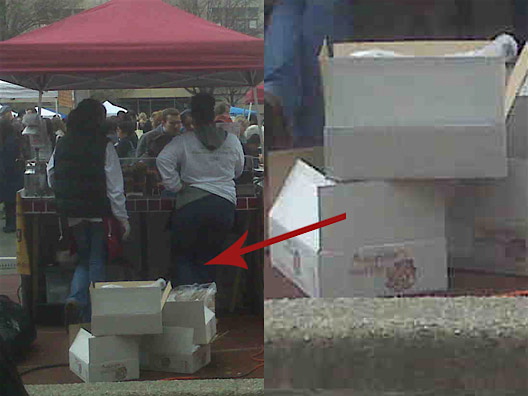 Was checking out the new Brooklyn Flea today to try one of those infamous Wafel & Dinges. They have a stand with toppings and of course a hot wafel iron. There was a huge stack of them pre-made and when you order they throw them on the iron to heat up. I thought nothing of this because because of the crowds. I received my order nice and hot and sat behind the stand to enjoy. While eating I was shocked at what I saw, the famous Wafel & Dinges that received tremendous press from many outlets for their authentic homemade flavor is con. There were piles of empty boxes of Augustin's Waffels from NJ. These people have the nerve to pass them off as their own, that's just not right. They also have the nerve to sell them on their website at a huge markup as their own.

Here is where they are buying them from. Attached you will find the picture proof of my claims, notice the box's logo and the website are a dead ringer.

UPDATE: Thomas DeGeest, owner of Wafels & Dinges, gave us a call and responded in the comments to the above allegations. His main points: a) he's never claimed to make his own waffles— he imports them from Belgium, and b) they were only selling Augustin's wafels on Sunday because they ran out of their own imported stash. See his full explanation here.