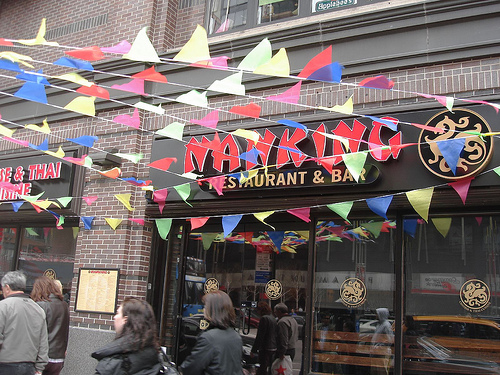 1) East Village: The once plywooded Panificio has been reported open by Imbible as of last Tuesday, sans liquor license. They've also scored some info via a shilly-sounding commenter: "A mix of traditional Italian cuisine and Italian American fare prepared by chef Kenneth Johnson. I didn't sample anything, but as one patron walked outside after dinner, I heard her say, "the food was excellent and we'll definitely be back." Status: Certified Open; 175 Avenue B; 212-253-2250. [Imbible]

2) Greenpoint: Gothamist has it that Greenpoint bar The Habitat was open as of Saturday night. Here's the lowdown: "The Habitat has achieved a rustic back porch ambiance by building an actual porch next to a wall dressed up with exterior siding and fake windows. Chef Ashley Engmann's small plate menu has empanadas, a pecan mandarin salad, cheeseburgers, and other sandwiches." Status: Certified Open; 988 Manhattan Avenue, Greenpoint; (718) 383-5615. [Gothamist]

3) Park Slope: A Fork in the Road reports that Barrio will open some time this week in the former Tempo Presto space. A walk-by convo revealed the following: "A guy working on the patio outside informed me curtly that the restaurant will be 'Mexican.' Kay...here's hoping for good margaritas and a nice outdoor seating area." Meanwhile, OTBKB has it opening on the 21st. Status: signs point to not open; 210 7th Avenue; Park Slope; Phone not listed [OTBKB]

4) West Village: A new outpost of Italian gelato craze, Grom, has been reported to have opened Saturday here and by Salli Vates down on Bleecker Street. She writes: "Just in time for the warm weather, a free cup of super-premium gelato awaits you. I'll see you on Saturday, April 12, at 233 Bleecker Street!" Status: Certified Open; 233 Bleecker Street; 212-206-1738. [Salli Vates]

5) Midtown: Midtown Lunch is reporting on the grand opening of a Midtown branch of the chain Nanking: "Nanking, the Chinese/Thai restaurant with 5 locations spread across New Jersey, Long Island and Queens, has opened their 6th location on Broadway btw. 50+51st. While I usually shy away from places that focus on more then one ethnicity, a co-worker of mine swears by the Jackson Heights Nanking, so I will give it a shot." Status: Certified Open; 1634 Broadway, Midtown; (212) 586-3100