This week, the restaurant gods have spared the city from the usual rash of shutterings. La Tour was the only big name place to close its doors this week, but of course, we have a couple stragglers. 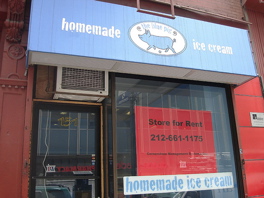 1) Midtown: Midtown Lunch reports on the definitive shuttering of ice cream chain Blue Pig Ice Cream: "In December I reported that the Midtown location of Brooklyn’s Blue Pig Ice Cream (on 43rd btw. Lex+3rd) was shuttered and had a unpaid Con-Ed bill inside their door. They re-opened the next day? but it seems as if the whole episode was just foreshadowing, because now the Blue Pig definitely is closed, and the location is up for rent." [Midtown Lunch]

2) Murray Hill: In Zagat's roundup, they report on two closings in the Grammurray area: "In Murray Hill, Chez Laurence Bistro is no more. Then down by Gramercy Park, Link has given up the ghost." [Zagat]