Who Goes There?: Spain Restaurant

Share All sharing options for: Who Goes There?: Spain Restaurant

This is the third edition of Who Goes There? a new regular feature in which Lost City's Brooks of Sheffield cracks the doors on mysteriously enduring Gotham restaurants—unsung, curious neighborhood mainstays with the dusty, forgotten, determined look—to learn secrets of longevity and find out, who goes there. 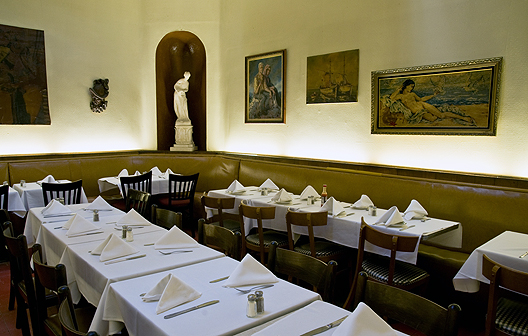 The name of W. 13th Street's Spain Restaurant itself is enough to tell you the joint is from another era. It's not called Sevilla or Costa Brava or anything more specific, but just SPAIN, illustrating that it arrived in Manhattan in a year (1960) when most New Yorkers were unfamiliar with Spanish cuisine.

Spain's basement space looks a lot older than its 47 years and has an extremely peculiar layout. A snug bar with the air of a living room and equipped with a few tables leads to a very long corridor. This passage is interrupted by a couple hidden dining alcoves, including one that would be perfect for clandestine trysts and/or backroom political deals. The end of the hall opens up into a large, faded, skylight-lit dining room—a romantically drab sanctum lined on three sides by a continuous tan banquette and bisected by a long row of tables down the middle. 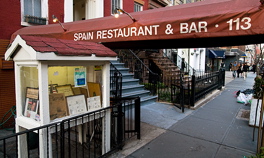 The walls are adorned with darkened knockoffs of various Post-Impressionist and Cubist masterpieces and some fake Greco-Roman statuary. If moss had been growing in the corners, I wouldn't have been at all surprised.

I heard nothing but Spanish from the waiters. Four plates of tapas were delivered immediately, all on the house. Everything from chorizo to mussels. About the food, the servings were ample, but beyond that, let's just say the entrees are cheaply priced (no seafood dish over $20) because they're not worth a penny more. But upon exiting the place, I realized I had made a mistake—both in ordering food at all, and in where I sat. The bar area of Spain Restaurant seems to be the joint's pulsing heart. During the hour I sat by my lonesome staring at the carved conquistador masks on the wall and the waiters' red jackets, the front had filled up with happy revelers—half of them Spanish tourists—all of them throwing back cheap wine and sangria. The seedy, low-ceilinged space is the real attraction here. Resist the trip down the hall, unless you need the bathroom.
—Brooks of Sheffield
· Who Goes There?: Fedora