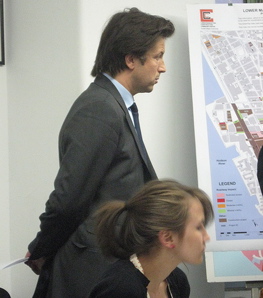 Since the liquor license resolution for the new venue by the owners of Cain was stricken from the agenda due to community opposition, last night's CB1 Tribecca Committee meeting went relatively smoothly. Though continuous complaints were voiced about the "black cars" (i.e. livery cabs) plaguing the 'hood, the chair ran a tight ship, reminding members that it's too late to stop changes in the neighborhood. Highlights:

1) Following his success before the CB2 board Tuesday, restaurateur Frederick Lesort hit CB1's Tribeca Committee last night, requesting a liquor license for his new venture in the upcoming Smyth Hotel at 85 West Broadway. After LeSort agreed to limit bar hours until 2 a.m. on weekends instead of 4 a.m., the committee easily approved his application.

2) In a surprise move at the end of the meeting, the committee opposed the renewal of a liquor license for Atomic Wings at 311 Broadway. An intrepid committee member discovered the restaurant only had a beer and wine license, not liquor, and it had expired on March 31, 2008. In addition, she complained that the restaurant was likely breaking the rules because it advertises margaritas and daiquiris on its menu board. That was enough for the committee—though renewals are usually routine measures that do not require a vote, the group voted unanimously to oppose.
—Erin Sikorsky
Photo: Frederick Lesort lobbying for a license in the Smyth Hotel
· First Word: Red Egg, LeDen Green Lit; Sohotel Must Wait [~E~]