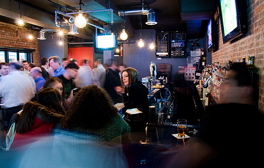 This week it's the attack of the commenters. Though we still found some shills from the usual offenders (looking at you Citysearch, Yelp), the commenters on both this site and others have really have an eventful week pushing their restaurants. Let's start with the most controversial but small time offender, Thunder Jacksons:

Perhaps it's because a couple commenters called out some of their brethren for shilling on yesterday's Thunder Jackson's post. Or maybe we're just surprised so many people have eaten at the place that's barely a couple weeks old and has zero online presence. Either way chances are the following three comments are shills: 1) "The food is fucking goooood! The burger may only be meat and bread, but if it were anything more, it would be ruined...And the BBQ jalepeno wings are pretty addictive as well. 2) I dunno. The music might not be great - but the BBQ jalapeno wings are soooo good and the staff is really friendly. 3) The steaks here are beyond anything I've ever gotten at a 'sports bar'..."
Shill Probability: 47%

A tipster points out that Public House's Citysearch page has six glowing reviews all posted within the last week. Strange since there are only 10 total. This brought us to the restaurant's Yelp page which similarly has a number of five star reviews, all posted in the last week: "The space itself is gorgeous and so is the staff...the menu offers a little something for everyone. My salad was awesome and to top it all off they have a specialty cocktail called the dirty blue martini, that is to die for. I'm an avid dirty martini drinker and adding blue cheese stuffed olives to a traditional vodka martini is genius...The vibe there is great too, its nice but unpretentious and fun."
Shill Probability: 62%

Slice isn't usually the place to find shills, but their comment section is just as susceptible to the sneaky pr rogues as ours. Take for example, their post on Artichoke pizza. Slice posts a reader tip/rave about new pizza joint Artichoke, and the commenters go crazy for it: 1) "Artichoke is amazing! Although not quite Di Fara (understandably so), I would agree that Artichoke is Manhattan's best pizza place I've had the pleasure of tasting, so therefore I suppose you could consider it 'Manhattan's version of Di Fara'...2) We went to Artichoke this past Wednesday and I have to say it was GREAT!!! The spinach artichoke pizza was unbelievable as well as the other pizza (sicilian & regular)."
Shill Probability: 82%