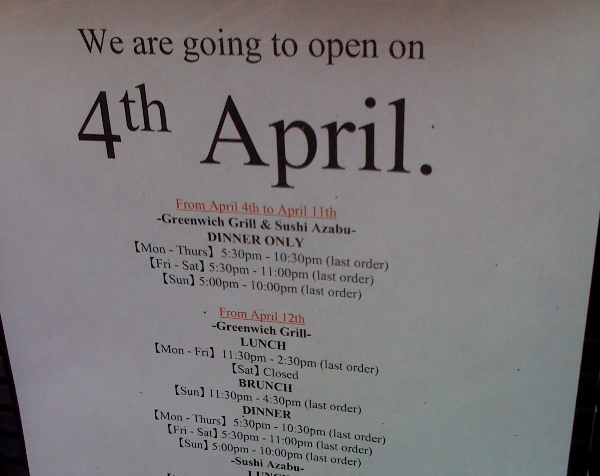 1) Tribeca: As you're well aware by now, Robert DeNiro’s Ago is set to open this week at the new Greenwich Hotel. NYMag has some of the initial deets on the place: “The most striking features of the wood-beamed, terra-cotta-tiled design are the stone fireplace and the ceiling installation of an alleged 90,000 wine-bottle corks, and the menu features Sciandri’s signature pizzas and bistecca alla fiorentina, both cooked in the wood-burning oven. Pastas are a given."; Status: Friends and family tonight, open to the public tomorrow. 377 Greenwich Street; 212-925-3797. [NYM]

2) Tribeca: Meanwhile, down Greenwich Street a bit, NYMag has it (and a photo sent in by a tipster confirms) that new Japanese “two-in-one” restaurant Greenwich Grill will be opening April 4th. Some background on the place: “While Greenwich Grill proper inhabits the first floor, Sushi Azabu, a bamboo-ceilinged, rice-paper-walled sushi bar, is located in the basement...both showcase the company’s signature Japanese-accented compendium of Italian, French, and Californian cuisines” Status: Not open. Opening April 4th. 428 Greenwich Street; 212-274-0428. [NYM]

3) East Village: Reports that “Manhattan now has its DiFara” were the kind of headlines new pizza joint Artichoke has already been making. Slice had the first word from a suspiciously shilly sounding tipster: “It’s a small location without any seating and free—yes, free—bread (cooked on premises) and cauliflower fritters to snack on while you wait (I hate cauliflower with a passion, but these were amazing). And then the pizza comes out bubbling. The sauce is sweet, and the cheese layered on in perfect proportions with an ample amount of char at the bottom for a crisp crunch with every bite.” Status: Certified Open. 328 E. 14th Street; 212-228-2004. [Slice]

4) Midtown: Midtown Lunch has it that City Burger from the owners of Abitino’s Pizza is having its grand opening today in Midtown. Here’s the lowdown: “The menu and prices are on par with GoodBurger, with the addition of pizza parlor staples like chicken wings and mozzarella sticks. Their meat will come from Pat LaFrieda, the same place the Shake Shack gets the meat for their burgers- so a comparison may be in order. Best case scenario: we finally get a shake shack burger in Midtown.” Status: Certified Open. 1410 Broadway; 212-997-7770. [Midtown Lunch]