Share All sharing options for: Eater Inside: Duane Park

Duane Park, the successor to Duane Park Cafe, opened last week to a modicum of buzz from all the usual suspects. Located in a colonial style mansion the place tries to be a little glitzier, a little more glamorous than its previous incarnation and has a few notable accents including a crystal chandelier from an old plantation and homemade wallpaper. As for food, the menu here follows the roots of chef Shawn Knight, who cooked for years in New Orleans with Emeril Lagasse, and features a number of Southern-influenced dishes.

It's hard to really say if this place will take off or not. It's got the looks, the chef cred, and the price point (entrees hover in the low twenties) to keep it popular with the neighborhood crowds for sure. The Brunz gave its predecessor, Duane Park Cafe, a love letter of a one star review three years ago, and it wouldn't be a stretch for the man to return to assess the work of the the new owners, chef, and design team. It will just take some time (most likely a few months) to see if the Knight's cuisine can bring the big guns a knockin' downtown. 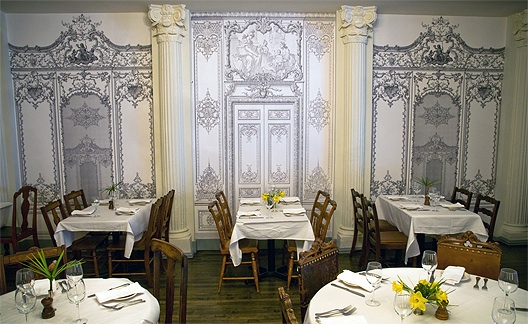