Who Goes There? Fedora Restaurant

Share All sharing options for: Who Goes There? Fedora Restaurant

This is the second edition of Who Goes There? a new regular feature in which Lost City's Brooks of Sheffield cracks the doors on mysteriously enduring Gotham restaurants—unsung, curious neighborhood mainstays with the dusty, forgotten, determined look—to learn secrets of longevity and find out, who goes there? 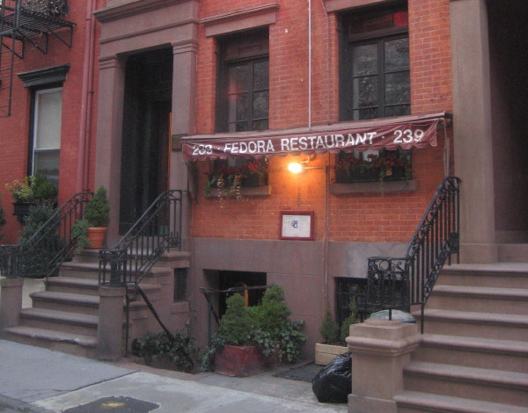 I was the only person nobody knew on a recent evening at Fedora Restaurant, the West Village fixture that exists in a time warp all its own, down a shallow slight of steps from the West 4th Street sidewalk. I was also the only patron under 50. I was not, however, the only man. In fact, aside from the sprightly, nearly-ninety Fedora Dorato—who owns the restaurant and still makes all the food—it was ALL men, Stonewall-era veterans sitting in parties of one or two, talking across the small room with each other about politics, the weather, their recent operations and what longtime local business the real estate market had just crushed. 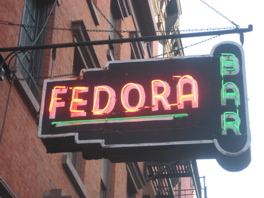 Fedora is a refuge for Village lifers who want to be reminded how the world below 14th Street looked in the 1950s. As one three-decade regular informed me, "You don't come here for the food. You come for the ambiance." That cozy atmosphere includes small tables; a low tin ceiling; NPR on the radio; a rotary pay phone; and a framed napkin signed by Lauren Bacall. Also, a communal greeting for every familiar face that passes through the door; the warm presence of the white-haired, Italian-born Ms. Dorato herself; and a sassy, youngish waiter named Georgie who knew one diner would want a Bloody Mary right away and let the lone lady at the bar pour her own vodka and tonic (into a huge brandy snifter filled with ice!).

Asked what was good on the menu, Georgie gave a comically exasperated shrug. "What do you like?" he replied. "Manicotti," I said. "Then that's what you get." I also had Minestrone and banana cream pie, one of several pies Fedora makes daily. One can easily imagine this lady ladling out free soup to beatniks during the Eisenhower administration. It all had a distinctly homemade feel to it, and if your mom cooks like this at home, you're doing all right. Prices are low, very likely because Fedora owns the building and lives right upstairs. (She's named after the opera, by the way, not the hat.) Fedora is the kind of place that probably will be around only as long as Fedora is. Before this slice of the old Village vanishes, seek it out.
—Brooks of Sheffield
· Who Goes There? Tout Va Bien [~E~]