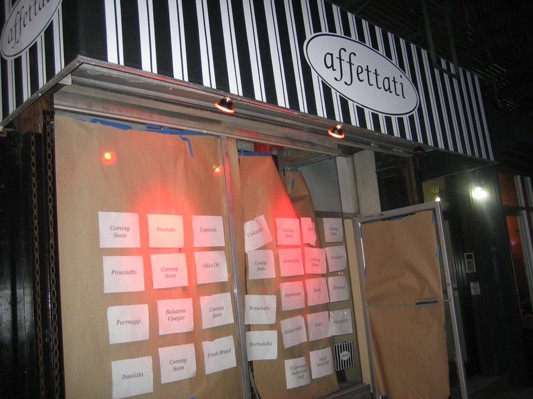 3) West Village: Today’s NYMag reports on the opening of once late night-only cookie spot, Insomnia Cookies, right near Elettaria on West 8th street. Here’s the lowdown: “Until now, oversized Insomnia Cookies baked in a commercial West Village kitchen have been a phone call or mouse click away only between the hours of 8 p.m. and 2:30 a.m. But this week, the company opens a bricks-and-mortar retail shop, still in cookie-run distance of its target demographic, but conveniently open during regular business hours to satisfy daytime cravings.” Phone calls confirm open status. Status: Certified Open. 50 West 8th Street; 212-228-2373. [NYM]

4) East Village: Last week Cutty had word that Bowery Electric, the new bar to open in the former Remote Lounge space had quietly opened, with an official opening this Wednesday. ZagatBuzz also reported on it back in February. Details, per Cutty, are as follows: “It’s a simple affair à la Midway, R Bar, and others, dimly lit by Edison bulbs: Horsehair-type stools at a long bar in the front room (eight beers on tap) and some tables in the boxy back room, where of course Remote Lounge’s surveillance stations used to be. The basement is apparently still being renovated, and the bouncer told us there will also be a second floor"; Phone calls confirm soft-open status. Status: Certified Soft-Open. Official opening is Wednesday. 327 Bowery; 212-228-0228. [Cutlets]

5) Nolita: The former Da Domenico’s space has become Dolce Vita, a new Italian spot that Cutty is reporting open for business. Here's some menu info: “Cyre plans to remedy that by cooking with local ingredients and making his own pasta, sauces, and stock. Lunch will offer the option of a $32 prix fixe, featuring items off the dinner menu...The restaurant is BYOB for now, but once a license comes in, Cyre’s roommate Erica Oldensky (who happens to be the wine director at Sfoglia) will pick out some suitable vintages.” Phone calls confirm it open. Status: Certified Open. 181 Grand Street; 646-688-4110. [Cutlets]

6) Astoria: Joey in Astoria has the scoop on a new restaurant called Vue Café that she reports opened recently. An early review of a meal here: "Chef Randall Benjamin offers up an eclectic menu, focusing on hearty meat and seafood dishes. My fiancee and I shared the sweet and sour spare ribs, topped with sweet pickled onions and red peppers. Our entrees also didn't disappoint"; Status: Certified Open. 12-14 31st Avenue, Astoria; 718.726.4400. [Joey in Astoria]