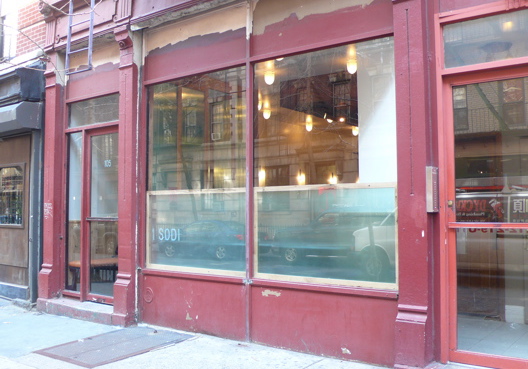 I Sodi, back in its plywood stage

1) West Village: At the beginning of February, TONY reported on the transformation of former Puff and Pao space into I Sodi, a new Italian restaurant from Rita Sodi with chef Michael Genardini of Alto and L’Impero. Today's NYMag has it opening this week with details of: “a small, weekly-changing menu, a compilation of classics like artichoke salad with shaved Parmigiano, lasagne, and salt-baked branzino.” Phone calls to the restaurant confirm. Status: Certified Open. 105 Christopher Street; 212-414-5774. [NYM]

2) West Village: Last week we spoke to Pichet Ong about the opening of long-plywooded sweets shop, Batch, who told us it would be opening "very soon." In today’s NYMag, it’s listed as opening this week, with some description: “The confections, too, depart from standard cupcake-parlor fare, with Asian-inspired yuzu-shortbread sandwiches, coconut-calamansi layer cake, Thai-tea tiramisu pudding, and durian ice cream.” Status: Not open, via walk-by. Phone line gives the busy signal. 150b W. 10th Street, 212-929-0250. [NYM]

3) Tribeca: Also in this week’s NYMag openings, is Duane Park, which describes the return of: “Shawn Knight, whose top-notch southern-inspired cooking you might remember from the short-lived Natchez, has resurfaced at Duane Park, the newish successor to Duane Park Café.” Also, curiously enough, the restaurant showed up in Page Six today, related to the return of former restaurateur, Delia Roche-Kelly, who made an appearance at the obviously already opened restaurant. Status: Certified Open. 157 Duane Street; 212-732-5555. [NYM]

And one update today:

4) West Village: In last Thursday's report, we noted the ambiguous opening status of the Rusty Knot, after unanswered calls and word that Ken Friedman was holding off until the end of the week for an official opening. DBTH came through today with a first report on the newly-opened Knot. This together with word from commenters on last week's post confirm open status on this one. Status: Certified Open. 425 West Street; 212-645-5668. [DBTH]