1) East Village: Imbible has the newest look at the former Subway on 14th St. and 1st Ave: "The renovations are definitely underway on a spacious new bar and restaurant...As of last week, lights are on, and, though the windows are still covered, we were able to snap a few interior shots through the fog. It's still got a ways to go, but there's certainly been some rapid progress." [PLYWOOD]

2 ) Chelsea: Looks like the space at 361 West 17th St (above) is coming along nicely. Per signage neat the plywood, it will be "Simple Kitchen: an organic market & cafe." [PLYWOOD] 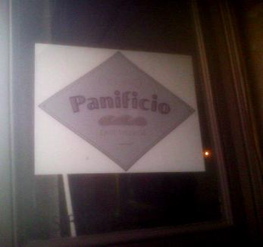 3) East Village: From the inbox, we have some news on the seemingly doomed Ave B space which most recently held Uovo: "Long vacant space at 175 Avenue B (corner of 11th) now has some signs of life. A sign (right) tells of Paniscio, some kind of bakery/cafe etc that will be going in." [PLYWOOD]

4) Gramercy: Zagat has the latest on Prana: "After a long fallow period, work has resumed in the old Scopa space at 79 Madison Ave. Rajiv and Payal Sharma...are looking to open the space by June as a multi-level Pan Asian called Prana with chef Chai Trivedi (ex Sapa) running the kitchen." [PLYWOOD]

5) Ditmas Park: Looks like Dimas Park's highly anticipated newcomer (at least for the people on that block) Pomme de Terre is inching closer to opening. Cutty reports delivery trucks are on the scene and the website is up and running. [POST-PLYWOOD]

6) Park Slope: Brownstoner reports that the owners of Sotto Voce are opening two new spots: "Within the next month they're going to open a bistro called Aperitivo on the corner of 1st street...A block and a half away, meanwhile, Sotto's owners are opening a much larger 'family-style' restaurant called Alta Voce...The eatery, on 5th Ave. between 2nd and 3rd streets, will sprawl over two levels and include a backyard garden and a wine cellar." [PLYWOOD]