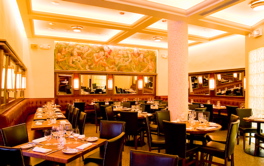 This week the shills appeared in all the usual places: Yelp, Chowhound, the inbox, and include a surprisingly hostile thread from the comments on the new West Village restaurant Commerce. But let's start with our least suspicious shill and work our way to the top offender, shall we?:

The following, from Chowhound, could be an honest review, but keep in mind they are talking about The East Village NYU haunt, The Smith: "Agreed. It's a restaurant that has something for everyone, limited waits, friendly staff, and at a decent price point. Happy Food Slut pans it for a lot of the peripheral but doesn't focus on what the restaurant does best, which, as MomoMed points out is well-executed food (for the most part) at a good price. I've been there for both brunch and dinner and left satisfied both times..."
Shill Probability: 34%

And from the inbox, subject: dennis foy: "One of my favs that is a little out of the way but a jewel is starting lunch and brunch--this place is a sleeper with wonderful food so get it on your radar."
Shill Probability: 54%

The comment thread on a post about Commerce is heavy on both the shill accusations and rebuttals. Here is the most suspect of the accused shills: "coming in the door on a cold night...great warmth and energy..lighting made us all look wonderful...meal was excellent cant get enough of the braised beef..wanted to slip the olive bread into my bag for breakfast....the sevice was good in spite of a full house...love the mural and the overall feeling of a friendly party going on around us! worth the trip from the upper east side...."
Shill Probability: 62%

A glowing Yelp review of Sakae Sushi is made more suspicious because the it's one of the Yelper's only write ups: "...The soup is very pure and clear, perhaps the paper did some wonders?!?! The amazing thing was the dish was served on open flame, and the paper didnt burn! We also tried the Sashimi Classic, thought the fish was very fresh, considering the amount we paid for. We also had tiger beer, and we were surprised by the price!! It's only $4.90. Overall, I would say that I had a great time and will definitely put this on my hangout list of restaurants!"
Shill Probability: 76%

Keep in mind this La Zarza write up in the comments was preceded and followed by completely negative reviews: "La Zarza was AMAZING!!!!! The food was incredible to say the least. Order the sangria--you'll understand. The Almond crusted Goat cheese croquettes--yum! Went on V-day. Music was great. We had Sangria, Paella, the Ribeye, the goat cheese croquettes, chorizo-potato-chick pea app, and for dessert--rice pudding tower and the chocolate empanada. VERY SATISFYING!!! And just enough food. WE WILL BE BACK!!!!! Sorry comment #3 if your experience was so bad....think you should give another chance. everyone was extremely nice! great mix of customers too."
Shill probability: 92%