This is the Monday Opening Report, a new regular feature that will provide the precise status of venues reported as open elsewhere. As per standard operating procedure around here, your contributions are so very welcome. 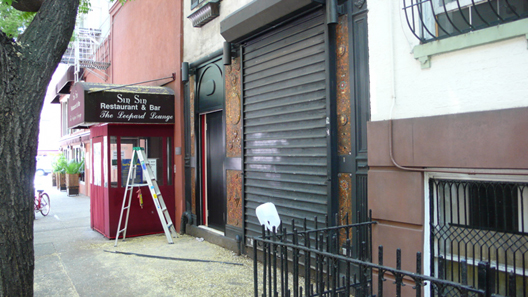 1) East Village: The Hearth guys’ much-delayed wine bar, Terroir, of plywood fame, was listed in NYMag’s openings this week. As for the food: “Canora is reviving some of the Italian snacks he concocted at Craftbar, like his sausage-stuffed sage leaves and a signature panino of duck ham with hen-of-the-woods mushrooms and taleggio.” Status: Not Open. “Opening at the end of this week or early next week.” 413 E. 12th Street.; 646-602-1300. [NYM]

2) East Village: Sasha Petraske’s E. 5th Street project has been buzzed about for months, formerly as some Mighty Ocelot joint, a supposed beer and wine bar that was never to be (thanks to angry neighbors). According to NYMag’s Openings this week, Petraske teamed up with old friend T.J. Siegal to open The Mercury Dime, as it will be called, a coffee shop/cafe where: "Siegal plans to continue operating the café by day, with free Wi-Fi and a small menu of pastries and made-to-order sandwiches.” Status: Unknown. Listed number is out of service. 246 E. 5th Street; 212-533-3295. [NYM]

And as always, a few updates:

4) West Village: The new daily Strongbuzz had the first word on Elettaria, the new venture by E.U.’s departed Akhtar Nawab and Craftbar’s Noel Cruz. And on Tuesday the latest news was that it would be opening tomorrow, the 26th. Status: Opening to the public Wednesday the 27th. 33 West 8th Street; 212-677-3833. [Strongbuzz]