First Word: Neighbors, As Usual, Up in Arms Over Le Souk

Share All sharing options for: First Word: Neighbors, As Usual, Up in Arms Over Le Souk 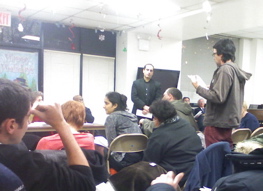 East Village: Veselka wasn't the only big ticket item before Community Board 3' SLA Licensing Committee last night. There was also the confusing and controversial appearance of the reviled Lower Avenue B restaurant/bar/dance club Le Souk.

First, why it's confusing. The SLA revoked (or in CB speak "canceled") Le Souk's liquor license back in April due to overcrowding, an act which the club is appealing. However, since that canceled license would have been up for renewal in January, the club appeared before the board last night to follow protocol, just in case they win their case with the SLA in the next few weeks. For their part, the CB3 committee wasn't sure they could, or wanted to, vote on a canceled license, and in the end they decided it wouldn't be "appropriate" to make a decision.

But that didn't stop them from opening up the floor to the angry group of supporters and detractors in the packed senior center, who were allowed to debate the merits of the club, the realities of gentrification, and how to prevent grand larceny for an hour.

We won't go into the specifics because, really, the details are boring as hell, but let's just say there was some yelling, a lot of rude muttering, a great deal of eye rolling, and countless incredulous chortles. Complainers were told to move to a new neighborhood and to "get a life," while supporters—who argued the neighborhood is safer now than before the bar's arrival—were told they were living in a dream world, that their arguments were fallacies. Almost everyone was trying to prove they had lived in the neighborhood the longest ("I was born here," "44 years!," "Back in the 70's cabs wouldn't even come to Avenue B!"). Since no decision was made, their appearance was ultimately irrelevant, and the fate of Le Souk rests with the SLA, we'll just end with the best quote of the night, from a Le Souk supporter:

Please remember that if the SLA does reinstate the license (unlikely), Le Souk will simply have to repeat this process all over again. Stay tuned to find out the fates of the half a dozen applicants that appeared during the five plus hours of CB3 madness.
· EaterWire: Liquor Licenses Revoked at Le Souk, 205 [~E~]
· Veselka on the Bowery Finally Gets CB3 Green Light [~E~]