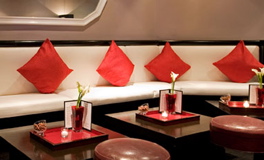 Another week, another group of shills. For this edition, we have suspicious reviews from Citysearch, Yelp, Menupages, and even the Eater inbox. Shillers, you will be stopped:

We start with a note from the inbox about FiDi newcomer Perle. Since the sender is French, the spelling mistakes aren't necessarily intentional (but we have a hunch they are): "I recommand you to try the new french restaurant 'PERLE' in the financial district. Amazing french food, nice design, wonderful wine list, very good staff and not expansive. one of the best restaurant-bar-lounge closed to wall st."
Shill Probability: 58%

Some oldies but some goodies. A tipster notices some love for Brooklyn's City Sub: "If you have not been to City Sub yet, you are missing out on the best sandwiches EVER. Deli-sliced, made-to-order, with all the toppings you need. Nothing compares." And a day later: "Most amazing + Huge subs EVER!! Great authentic taste, at a good price."
Shill Probability: 67%

A suspect Philippe review from Citysearch: "My friend -a 'wannabe' foodie- recommended I go to Philippe after she had such a good experience there at her recent company corporate dinner...I was amazed at how on point my friend was! We went on a Saturday night, and had a fantastic time. Our waiter was very polite, and was helpful with describing the delicious list of specialty cocktails. We had the salt and pepper calamari, as well as their famous chicken satay, to start. Both were uniquely delicious, and were nothing close to the bland copy-cats I had eaten at other restaurants. Our main course was the filet (melt in your mouth!), chicken jo lau (garlic sauce to die for), and the green prawns (amazingly fresh veggies and prawns)..."
Shill Probability: 72%

The raves in the following review for new UWS restaurant Ducale could just be a typical case of Yelp hyperbole, but the write up sounds a bit suspect to us: "Just went to the new restaurant on 79th and Columbus called 'Ducale'. This place is all class, but doesn't break your bank account. I had the Arugula Salad to start, which was heavenly -- a sherry roaster pear with melted Gorgonzola, over a bed of fresh arugula -- it was to die for! For an entree, I had their Chicken Rollatini which was absolutely succulent. The portions are generous, the staff is exceptional, and the environment is romantic and elegant. I'll definitely be back. This is easily one of my favorite new spots on the Upper West Side."
Shill Probability: 89%