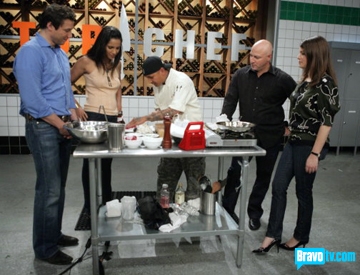 This week's Top Chef begins with a tear-stained elegy from departed bear icon Richard to plaid booster Alex: "Fuck the rest of them." Aw. Alex is genuinely touched. "Richard touches me." Well, he's gone, so now he can only touch you with the fingers of his words.

Maybe a QuickFire Challenge will help Alex cook the pain away? Rocco DiSpirito is on board to judge the contestants on breakfast amuse-bouche. Padma calls him "one of the most recognizable faces in the culinary world" but I think maybe her English is failing her because "recognizable" does not quite mean the same thing as "changeless", "rigid", or "frozen". I am kidding you, Rocco. You are beautiful and if I had a daughter I'd want her to marry you.

Daniel coats a zuchini flower in cornflakes and makes some kind of breakfast log? His shirt reads "Trust me, I'm perfect" but it should really say "Trust me, that looks like I fried something that used to be inside me." Most of the contestants make their elegant mouthfuls too big. But Rocco thinks Leah's are the perfect size. I agree! She wins immunity for the second week in the row, and I couldn't be happier.

The Elimination Challenge will require the contestants to prepare a cooking demonstration for a live television segment with the judges. It should be recipes people can cook at home. Or not cook at home, in Ariane's case, as she makes a Jersey beefsteak tomato and watermelon salad. "The secret ingredient is that I cut everything with the same knife and then put it in a bowl." Daniel is confident he'll win, as he says he's charismatic. Is charisma when you get a chance to be on fake live television and yell "Baba booey, hey now"? Well done. Shave another notch in your face. (I like to imagine that each notch represents a time he was stupid, divided by one thousand.)

Jamie, despite constantly reminding everyone that she's been on live television before, can't finish cooking her egg. Melissa makes shrimp so hot Tom spits it out. And Alex can't make his creme brulee, a terrible idea for a short segment. Plus, he has a problem with speaking in public. He's a chef, not a public servant! (Huh?) They end up on the bottom.

The top three? Jeff of the Dilido Beach Club (second 'i' is silent) wows everyone with his slick Miami presentation. Fabio, according to Tom, impresses by making jokes about his Italian accent, which puts everyone at ease. Because before Fabio acknowledged it, his accent was making everyone extremely nervous? And oh, Ariane did well too.

Early the next morning, Tom wakes the top three up to let them know their dishes are going to be judged *live* on the Today Show. Ariane is visibly giddy as she is clearly the target audience for that show. Fabio is wearing an Italian Stallion t-shirt, but I really wish it said Italian Scallion instead. Jeff stretches like a lion.

The ladies of the Today Show tear into the food like animals. It is insane. They are like secretaries at your office when someone puts a box of chocolates out. "Get these things away from me!" I would if you hadn't locked the box in your drawer. (I mean face.) But Jeff's shrimp with Muhamara sauce isn't a hit. Kathie Lee makes a gagging sound and runs away to spit it out. (That's what Frank Gifford said.) The winner? Ariane, obviously. The ladies smelled one of their own and rewarded her. Carla is *very* happy.

On the chopping block, Melissa maybe throws Alex under the bus by implying he doesn't even want to stick around. Alex makes a half hearted defense, but it's not enough to stop the judges from telling him to pack his knives. But it's OK, because he's got a wedding to think about! And vows to write! Take notes from Richard. "To my wife: fuck the rest of them."
— Max Silvestri
· All Top Chef Coverage [~E~]