And now, a small bit of Plywood before we close the books until 2009. 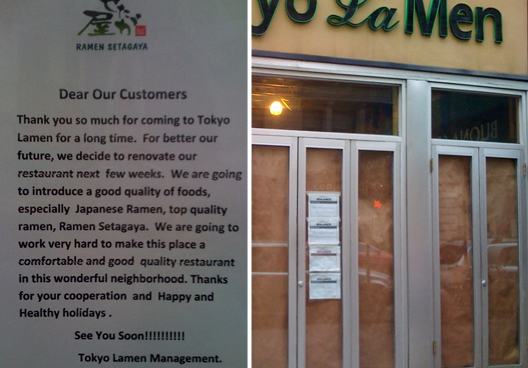 1) Central Village: Tokyo Lamen has closed to make way for a branch of casual Japanese noodle shop, Ramen Setagaya. Among the current postings at 90 University Place, we've got permits for demo and some fairly teary signage: "Thank you so much for coming to Tokyo Lamen for a long time. For better our future, we decide to renovate our restaurant...we are going to introduce a good quality of foods..." [PLYWOOD]

2) Prospect Heights: It's so nice when proprietors do the work for us: "I wanted to "tip" you guys off on a new place in Prospect Heights, Brooklyn. Its called Cornelius and is the collaboration of the folks from Franklin Park, Soda and Le Gamin. The focus is many, many, many whiskeys, bourbons and vodkas and I'm serving up some American comfort small plates. We are opening Monday, January 12th. Please come check it out. Cornelius is at 565 Vanderbilt Ave. at Pacific St." Nice presentation and approach for Brooklyn, go early and brace for crowds. [POST-PLYWOOD]

3) Chelsea: Either they've got a hook-up a scaffolding company, or Moroccan baby-empire Turks & Frogs is in progress on two new venues at once. In addition to the joint they're working on in Greenpoint, they are apparently under construction in Chelsea. TipsterWire: "There's a new hotel under construction at 116 west 28th st, and while we hear it's going to be a Fairfield Inn (yuck - as if our block needs another ugly chain hotel), the plywood above the scaffolding has two big posters for Turks & Frogs. Does this mean there will be a T&F in the hotel when it opens? We can only hope!!" Bonus: Belated, congratulations on your wedding, Osman. Nice show, guy. [PLYWOOD; previously]