Introducing Rally Cry, a recession-appropriate answer to our suspension of the Deathwatch. Rally Cry will take on a couple of evolving formats, but one will be as this Rally Cry is: a straight forward plea from management or local customer for support for a struggling venue. To qualify, venues shall be staring down death dead in the face. Publicists need not apply, however others wishing to cry shall please direct their inquiries to the tips@eater.com. 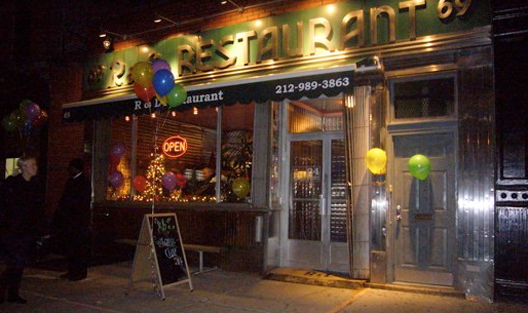 The backstory at R&L, in the heart of the Meatpacking District, is familiar. A long time ago, in a galaxy far, far away, there was a restaurant called Florent. Before Florent, beginning in 1955, there existed a place named R&L at the same address, 69 Gansevoort. Florent namesake Florent Morellet was considered a pioneer for taking the space when he did, in 1985, then a legend for turning it into a seminal New York bistro—stop us any time this starts to sound familiar—and then lost he lost his lease and closed on June 29th, 2008. After that, owner of the building, Joanne Lucas, as crudely and clumsily as possible decided to reopen the restaurant in its former name, yes, R&L Restaurant. (Morellet acknowledged that this decision, to reopen under the old name, was the 'second best option'. Blah blah, then the Health Department shut it down for another 6 months. And here we are, R&L open and empty and bleeding cash; neighbors in need of a real local coffee shop, still reeling from the botched restaurant hand-off.

I just came back from the opening party for R&L - it's cleaner than ever, the food is delicious - with a menu that is basically the same with a some upgrades - ribeye, milkshakes. They need help. No one knows what is happening there. Lots of regulars from before it was Florent were there tonight - many of the same staff from the Florent days are still there... including the kitchen staff. Our neighborhood needs a place like this...Hopefully you all will consider putting this on the Open column - its open 24/7 - at least give folks the option. The owner Joanne has the best intentions, but has missed a lot being out of the restaurant business in Manhattan for 23 years.

I've been away, but the few times I have walked by there have been 3 - 4 people in there, or sometimes 2 - 3 tables. She isn't going to get the same people, it's got to be different locals...and probably the gay community wont come around. I know you'll never believe me, but the show Florent put on was just that, Joanne Lucas really wanted him to stay and offered it to him for a very low amount. But he couldn't ever get more press than he did with his big drama, so the plan worked - it was a slash and burn mentality.... sad.

There you have it, friends. Get thee to R&L for a strawberry milkshake? The call is yours.