Share All sharing options for: Year in Eater 2008: Top Newcomers

As is the tradition at Eater, our closeout of the year is a survey of friends, industry types, bloggers, and readers. This year, we asked the group seven questions, from Meal of the Year to Top Standbys. Meals of the Year, Biggest Dining Surprises, Neighborhoods of the year, the Year in One Word, and Top Standbys have already dropped. After this, all that's left is headline predictions for 2009, which comes tomorrow. 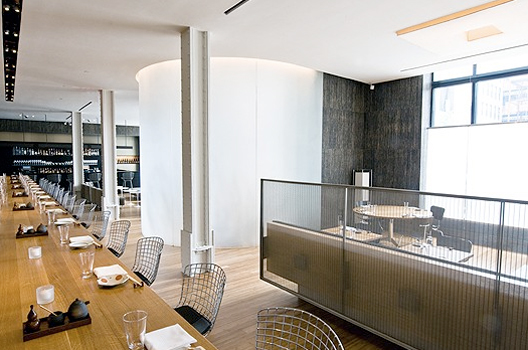 Kate Krader, Food & Wine:. Ko, John Dory, Matsugen; for honorary mention for 4th, I'm going to tie it between Convivio and Irving Mill since they got the resto chef Ryan Skeen. i'm a big fan of his.

Bret Thorn, Nation's Restaurant News: Corton, Bar Q, Rhong Tiam (it opened a year ago in October, but it was discovered by the food world this year; if that disqualifies it, then put me down for Mercadito Cantina).

The Cutty, The Dash Feedbag: Convivio. Alto/Convivio: New York was lucky in not having to lose Scott Conant's understated brilliance in order to gain Michael White abbodanza of fat and flavor; Convivio has gotten its due but Alto still awaits the panegyrics of the bloggers. Terroir: the perfect place to drink wine and be lectured to by an oenophiliac madman, while eating chop after chop of Bev Eggleston's sublimely gamey, coase, and transcendant ossabaw pork. Market Table: Again, as with L'Impero, we didn't have to lose Kenny Shopsin to gain this supremely romantic and urbane corner restaurant, one of the very few in New York that delivers on the city's cinematic promise. If only Mikey Price would adopt partner Joey Campanaro's bun, it would also have the city's very finest hamburger. Honorable mention to Mia Dona, a much-needed middle ground between the rustic grander of Kefi and the cerebral and elevated Anthos. Porchetta and Dirt Candy: paired low rent East Village homages to flesh and vegetables, respectively.

Danyelle Freeman, Restaurant Girl: Momofuku Milk Bar definitely snuck in under the wire; the pork and egg bun is pretty genius. I love Matsugen and Scarpetta.

Ed Levine, Missionary of the Delicious: Txkito, Salumeria Rosi, West Branch (apologies to John Dory, Convivium, and Corton for my failure to get to any of them)

Ryan Sutton, Bloomberg: No doubt, Momofuku Ko, Corton, Convivio and Bar Boulud were among the new titans of 2008. But some underdogs also belong in anyone's top ten list. Commerce, a West Village "gastro-diner", is just as ambitious, if not more so, than The Little Owl and Market Table, its West Village peers, but has the benefit of being much less crowded. Commerce's orecchiette with trotters, tripe and oxtail could be one of the most heartwarming dishes of the year (and they could have one of the city's best bread baskets). And if we're talking best new cocktails as well, let's give a shout out to Bar Milano, Apotheke, Clover Club and even Rusty Knot.