As is the tradition at Eater, our closeout of the year is a survey of friends, industry types, bloggers, and readers. This year, we asked the group seven questions, from Meal of the Year to Top Standbys. All will be answered by the time we turn off the lights on Wednesday. Responses are related in no particular order; all are cut, pasted and unedited herein: 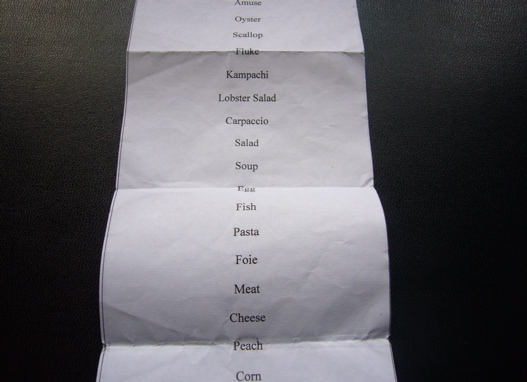 At Momofuku Ko, the lunchtime set list. Circa August, 2008.

Kate Krader, Food & Wine: Ko. After about a month when they got the kinks worked out and Sam got comfortable serving food behind the bar and the whole experience kicked in (when you could have the hamachi with poppy seeds and the foie gras and whatever else, all in one night). And specifically the night that Gael Greene and the craig's list guy showed up, because it personified the res drama mania.

Oliver Schwaner-Albright, New York Times: The croissant at Claude under new ownership. There was paper on the windows for weeks, but when it reopened it looked exactly the same, more a historical restoration than a renovation, and the croissant is the same as it ever was: the best in New York.

Danyelle Freeman, Restaurant Girl: It was definitely Matsugen. The flavors were intense, yet simple. I never thought tofu would linger in my memory, but this one does. So does the Matsugen soba and the sesame paste on the cold goma dare. I finished with mind-blowing grapefruit jelly and JG's molten chocolate cake.

Noa Taffet, Stilettos on Cobblestone: Little Owl. The playlist, graciousness and charm would be enough. But then they go and make consistently excellent food on top of it? Showoffs.

Gabriella Gershenson, TONY: According to our critic, Corton hands down.

Steve Shaw, eGullet: Chris Cosentino's head-to-tail dinner at Astor Center. My ass is quite large, so I don't get on a plane unless I'm being paid to do so. Thus the chances of me making it out to Incanto for a meal in the foreseeable future are slim. I had several meals in 2008 that could have competed for meal-of-the-year honors, but I can have a meal prepared by Michael Anthony, Michael Psilakis or the Chang Gang on any given Sunday. Not so with Cosentino.

Ryan Sutton, Bloomberg: First meal at Momofuku Ko. Specifically: When I was DEMOLOSHING the deep-fried short ribs while Chang was blasting “There Goes the Fear” by the Doves on the restaurant's iPod. It was like a fine-dining response to a summer beach party.

BL: I really hate to be on the bandwagon right at the start, but, of course, the call is Momofuku Ko with Krader on that fateful night that Gael Greene showed up. The sideshow was spectacular, though not better than the the main event, the menu, which at that time had a special limited edition Ko pasta, in addition to the shaved fioe gras and deep fried short rib.