As is the tradition at Eater, our closeout of the year is a survey of friends, industry types, bloggers, and readers. This year, we asked the group seven questions, from Meal of the Year to Top Standbys. Meals of the Year dropped earlier, and all will be answered by the time we turn off the lights on Wednesday. On we go, in no particular order; all responses cut, pasted and unedited: 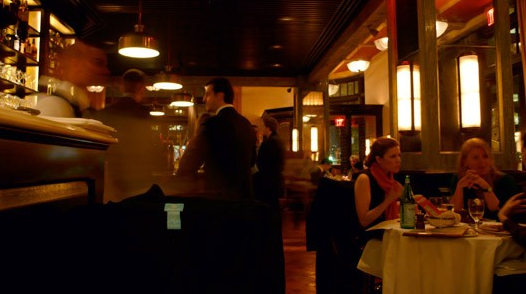 Ago, surprisingly awful; pictured in June, 2008.

Q: What was the biggest dining surprise of 2008?

Ed Levine, Missionary of the Delicious: The unlikely but apparently very successful pairing of Drew Nieporent and Paul Leibrandt.

Zach Brooks, Midtown Lunch: Three months of hype about a single dish may actually diminish its impact (I'm looking at you shaved foie gras from Ko.)

Robert Sietsema, Village Voice: Although I’m a hyper-Changophile, and eat noodles at Momofuku nearly once a week, his new bakery didn’t floor me. In fact I disliked the salty pistachio soft serve and the sour-kimchee-heaped focaccia. Please, take this place to Vegas.

Andrew Knowlton, Bon Appetit: No. 7 in Fort Greene. If it was in Manhattan it would be the talk of the town.

Kate Krader, Food & Wine: That Tuesday's at Tom was good enough to make me want to eat in a private dining room again. It's just awesome to have him right there cooking for you.

Ken Friedman, The John Dory: The number of people who cancel reservations at the very last minute or no-show. (Its a surprise because we've never dealt with reservations before. They kinda suck.)

Mary Rambin, NonSociety: The chef at Forge served two distictive Jean George dishes and when I asked if he had any role models or inspirations he said no.

Ryan Sutton, Bloomberg: Allegretti: I was heartbroken when Provence in SoHo closed its doors and replaced itself with Hundred Acres. Just what this city needed -- another grass-fed burger (pardon, "pasture-raised" burger). Then out of nowhere came Alain Allegretti, who filled the city’s dearth of Provencal fare. He didn't just give us rustic cuisine. He gave us high-end, Ducasse-worthy Mediterranean dishes. To be fair, the prices are high and sometimes I wonder whether this restaurant would be better off if it served a menu of cheaper, smaller plates. It would be the Momofuku of Southern French. Because sometimes you don't way to pay $36 for guinea hen.

Oliver Schwaner-Albright, New York Times: Bar food. Not the quote-unquote gastro pub, which was always a British affectation and little more than a restaurant in pub’s clothing, but serious bars where there’s serious drinking, and now serious food: Wilfie & Nell, Employees Only, Pegu Club (back in the day), Radegast, Char No. 4, Eurotrip. It’s just going to get better next year.

Danyelle Freeman, Restaurant Girl: Rouge Tomate. A restaurant with an in-house nutritionist and food's that's healthy and tastes good. Maybe it's just wishful thinking, but I think it's a great prototype for a restaurant of the future.

Steve Shaw, eGullet: 15 East. I can't believe how long it took me to get there, and how much the place exceeded my (already high) expectations. I was totally blown away by all aspects of the experience. Bruni tends not to be terribly reliable on Japanese, but he nailed this one. It's my new favorite.

Matt Rodbard, Metromix: There were 14+ openings the week of Dec. 8. B1 headlines, be damned...‘Top Chef New York’ makes the NYC dining scene look dull...Momofuku Saam gets three stars; Ago survives the 'Poor'. [It didn't—Ed.]

Brooks of Sheffield, Lost City: The filet mignon at Frankie and Johnnie's was actually excellent. Never expected that. And the bolognese sauce at Villa Mosconi was among the best I've tasted. And my dinner at Adour, while fine all around, was just not spectacular; kinda disappointing.

The Cutty, The Dash Feedbag: Ordering a steak and getting a half a steak at Secession; the "poor man's rice" at Boqueria, which was rich indeed; being invited one night to eat ortolans with Tony Bourdain; just how bad Benoit was; the fact that everyone reviewed Convivio as a new restaurant, when in fact it was exactly the same as before, albeit with different draperies and a longer menu, vindicating Chris Cannon's hugely expensive gamble; the apotheosis of the LaFrieda burger blend; four stars for Ko; Alex Raij getting the mitten at Tia Pol; AC getting the mitten at A Voce.

LS: The continued existence -- perhaps, dare one say, renaissance? -- of a little place once called FR.OG.