How to deal with the myriad venues closing, un-closing, and re-closing these days? If we call these ambiguously shuttered, do we hedge sufficiently? Let's hope so. 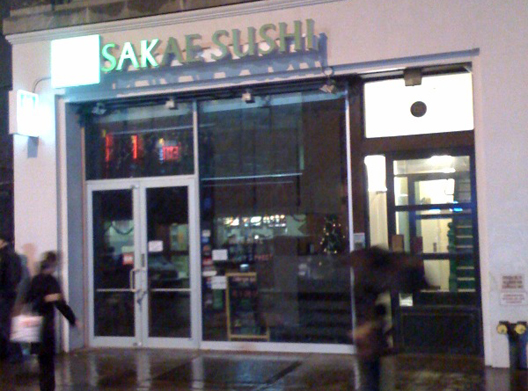 1) First up, people, we've got trouble. Right here in River—er, the West Village, where Sushi Sakae, a new conveyor belt sushi concept from the Far East is, at the very least, cutting their hours way back. From a trusted correspondent below 14th Street:

"Was walking by the Singaporian (is that a word?) kaiten-zushi chain Sushi Sakae's spot on near the West 4th st. stop last night around 8pm and saw it was closed up with the doors chained shut. One solitary light was on in the kitchen. Hope they didn't leave a sous chef in there by accident. Whole thing's a shame as we need some conveyor-belt sushi in NYC. Seriously."

Calls to both the West Village location and their NY-debut digs in Midtown were met with the dreaded, "This line as been temporarily disconnected." Plus, a functioning website this is not. Hard to believe a chain with multiple locations across the Far East would get in and out of New York so fast (they debuted here in February), but she ain't looking good. [AMBIGUOUSLY SHUTTERED]

2) Up to the Upper West Side we go. A reader in those parts writes: "There is brown paper in the windows at Tokyo Pop at B'way and 103rd. Food was always good there, but service was TERRIBLE. I know a lot of people who stopped going because of the service." Before we call time of death on this one, let's note that their answering machine at present indicates business as usual. But. [AMBIGUOUSLY SHUTTERED]

3) Il Bastardo in Chelsea has a 2009 New Year's Eve menu posted, but: "I tried to make an online reservation at Il Bastardo in Chelsea on opentable and for two different days and times the response was no tables available within two hours on either side of the time requested. Is the restaurant still open or are they not using open table anymore? Just wondered if you might know." [AMBIGUOUSLY SHUTTERED]

4) And, finally, the matter of Tong Thai on 13th Street. "Folks I know just tried to eat there. The heat was turned off and the staff noted that they would be closing soon." [AMBIGUOUSLY SHUTTERED, VERGE OF]

Got shutter? Here, now and always, your contirbutions certainly appreciated.