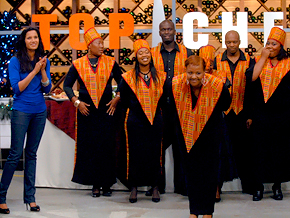 This week's Top Chef starts off with a classic Christmas mystery! (Those exist, right? Like, who had sex with Mary, and are we supposed to believe every time Padma's eyes are red that's myrrh we're smelling?) Stefan says he has woken up with a shoe inside his ass, but he isn't sure whether it's Tom's or Padma's. There's a simple mnemonic device to figure that out: shoes of purple, probably Lakshmi's, leaves of three, let it be. Easy, right? Or, if you want, you can just carve a summertime Christmas watermelon jack-o-lantern, because you're European and who the shit knows.

Padma welcomes Martha Stewart to the kitchen to judge the Quickfire Challenge! Please, please, please let the challenge be cooking for prisoners. Jail food? Only kitchen tools allowed are shivs? Make a cake with a saw in it? Anything. Unfortunately, I'm wrong. They have to make a one pot dish. Padma loves saying pot so much. "When it comes to one pot dishes, the best way to make the one dish is in a pot, and I feel like pot really enhances the pot of the pot. P.S. I love pot."

Some fare better than others. Martha isn't impressed with the invisible mushrooms in Fabio's polenta, a dish his grandmother taught him when he was a "bad boy" so he wouldn't "destroy the house." He's not happy. "My grandma woulda be so ashame of you, you woulda not believe-a da meatball." Martha prefers Hosea's paella, Jamie's scallops, and Ariane's beef and puree. Ariane sees a kindred spirit and has basically taken to saying "Jersey" instead of "uh" or "um" at this point. You should take another page from Martha, Ariane, and go to jail. Oh man, Martha picks her. She wins immunity! But also, an autographed copy of Martha's book. "From one Jersey girl to another." Ariane winning is as awful as the movie Jersey Girl. (What a topical reference, guys. That's a hot movie that just came out.)

The Elimination Challenge is cooking a holiday party for amFAR, the American Foundation for AIDS Research. Wait, a holiday party? Are all the guests going to have to pretend it's not July too? This is like a role-playing game! A really bougie one. Singing fills the kitchen, and suddenly the Harlem Gospel Choir files in. Carla knows immediately, because she sees the Kente cloth, and obviously there is only one group of people in the world who wear Kente cloth and that group is the Harlem Gospel Choir. Carla is such a mad woman. Her mutant power is being a spaz.

Each contestant draws a knife with a number on it, and the Choir awkwardly reveals through the "power" of song that each chef's dish will have to be inspired by one of the twelve days of Christmas. Really? Judges are no longer allowed to complain about bad food. "Being a Top Chef is all about being able to cook things based on song lyrics." Shoot, who said that quote, I can't remember. Oh yeah, no one. This is the worst.

After a marathon prep session and refrigerators packed with Gladware-brand Gladware, the contestants return in the morning to find a Grinch left one of the fridges open. Hosea and Radhika's proteins are ruined! It'll take a summer Christmas miracle to save their dishes. But all the chefs band together to help one another in the spirit of St. It's July.

At the Prince George Ballroom, our host is the #1 actress in the world Natasha Richardson. Wow, her dress is really trying to raise a lot of money for research. Why do they keep showing her from above? Stay classy, Bravo. Oh shoot, definitely too late for that because all the guests at this AIDS fundraiser have to choose the best dish by pinning their AIDS ribbon on their favorite chef's table? Whichever contestants get the most AIDS (ribbons) wins! Yikes.

Fabios' explanation of how his dish relates to "nine ladies dancing" is hilarious. "You have the lady crab, and she-a lays her crab eggs, and then she dance around nine times for the good luck to keep her baby crab babies for to be safe this Christmas. Enjoy-a da crab cakes."

Melissa I'm pretty sure says "eight maids of milking fellas." I never realized those maids were milking fellas but that's hot if a little unappetizing. Hosea and Jeff compete with one another to flirt with the most trashy society people. You both win (lose)! Tom isn't impressed with Ariane's deviled eggs. I'm glad someone can see through her mediocrity.

The judges choose Radhika, Stefan, Jeff and Hosea as the winners. Though they really enjoyed Jeff's salad, they didn't think he needed two cheeses. A lockjawed Ms. Richardson says, "It's a bit like putting brie on camembert hahaha." Hahaha, oh Natasha, we all know what a faux pas that is. (Whoops barf.) But with the most AIDS (ribbons), Hosea wins. He's on top of the world.

During the loser lineup, Jamie gets pretty sassy with the judges. "I was sort of "in the weeds" if you will say." No one will say that, Jamie. Melissa and Eugene don't fare much better. But hey, a surprise! Tom comes back to the stock room and chastises all the contestants for their middling cooking. Step it up, conchefstants. They all get a pass. No one's going home. Prove Tom wrong, guys.
—Max Silvestri
· All Top Chef Coverage [~E~]